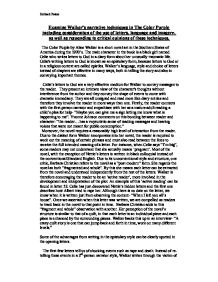 Examine Walker's narrative techniques in The Color Purple including consideration of the use of letters, language and imagery, as well as responding to critical opinions of these techniques.

Examine Walker's narrative techniques in The Color Purple including consideration of the use of letters, language and imagery, as well as responding to critical opinions of these techniques. The Color Purple by Alice Walker is a short novel set in the Southern States of America during the 1920's. The main character in the book is a black girl named Celie who writes letters to God in a diary form about her unusually traumatic life. Celie's writing letters to God is known as an epistolary form, because letters to God or in a religious context are called epistles. Walker's language, style and choice of letters instead of chapters are effective in many ways, both in telling the story and also in conveying important themes. Celie's letters to God are a very effective medium for Walker to convey messages to the reader. They present an intimate view of the character's thoughts without interference from the author and they convey the shape of events to come with dramatic immediacy. They are all unsigned and read more like diary entries and therefore they involve the reader in more ways than one. Firstly, the reader connects with the first-person narrator and empathises with her as a mature adult reading a child's plea for help- "Maybe you can give me a sign letting me know what is happening to me". Yvonne Johnson comments on this bonding between reader and character- "the reader... has a voyeuristic sense of reading messages and hearing voices that were not meant for public consumption." Moreover, the novel requires a reasonably high level of interaction from the reader. Due to the dialect form Walker incorporates into her novel, the reader is required to work out the meaning of certain phrases and must also read between the lines to receive the full intended meaning of a letter. ...read more.

Consider the differences if we compared The Color Purple to Jane Eyre. Although Jane Eyre spans many years, like the Color Purple, we only get one, constant narrator relaying the events. For this reason, we cannot bond with the young Jane Eyre in the same way as we bond with the 14-year old Celie. Mel Watkins mentions Celie's maturation in her criticism- "As the novel progresses... and as Celie grows in experience, her observations become sharper and more informed; the letters take on authority and the dialect, once accepted, assumes a lyrical cadence of its own." Celie's writing style also develops and her use of imagery and wit make her letters an enjoyable read. An example of this imagery can be found in Letter 37. When Celie sees Sofia for the first time after she is arrested, she writes- "she just about the color of a eggplant." An important point in the novel that reflects this development occurs in letter 47, where Celie retells her experience of rape to Shug. Unlike the innocent and na�ve description of the rape in the first letter, the retelling is clear and articulate- "the blood drip down my leg and mess up my stocking". Walker retells this incident to inform the reader of Celie's maturity and also to re-inforce the bond between Celie and the reader. More importantly though is the way in which Walker reminds us of the incident by retelling it in a way that reveals more information to the reader. Moreover, Shug's loving and supportive presence contrasts to the atmosphere of fear and insecurity present in the first account. Thus, the reader is affected in a completely new way. ...read more.

Also the shocking language used in the opening letters, affects the mature, adult reader, who feels a desire to answer Celie's plea for help. Walker's use of dialect makes the book colourful and full of character. It also makes the novel easy to read and understand due to the fluidity of the language. The dialect also re-enforces the bond between reader and narrator due to Celie's na�ve use of language. Celie's style develops in complexity as the novel progresses. This is shown by Walker in the form of short, blunt sentences in the first few letters and then complex images later on in the novel. Moreover, Nettie's letters, although criticised by many, add a broader perspective to the novel, whilst challenging the status of Standard English. With The Color Purple being a post-modern novel, Nettie's letters also encourage the reader to be 'active' in piecing together the fragmented letters and filling in the gaps between them. Time is also used by Walker in conjunction with the epistolary structure of the novel to only focus on the important events of Celie's life. This makes the novel easy to get through quickly, whilst still being an extremely effective read. Finally, Walker's imagery adds colour to the novel. Celie's developing writing style conveys this imagery and is extremely effective when coupled with her dialect style. Without the dialect style, Celie's language would lose ethnicity and individuality and would be bland like Nettie's traditional style of writing. Furthermore, one image in particular, the colour purple is very significant in emphasising key themes. These include Sexism, Racism and Religion. These themes can also be viewed as one all-embracing theme of independence in contrast to oppression. The colour purple is Walker's most extensive image and for Celie it symbolises happiness, security and faith in God, the recipient of her letters. Richard Potter Richard Potter ...read more.