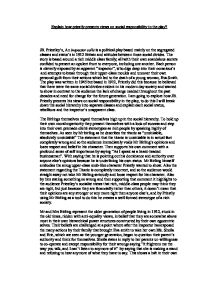 Explain how Priestly presents views on social responsibility in the play?

Explain how priestly presents views on social responsibility in the play? JB. Priestley's, An inspector calls is a political play based mainly on the segregated classes and status's in 1912 Britain and attitudes between those social divides. The story is based around a rich middle class family; all with their own scandalous secrets confided to present an opulent front to everyone, including one another. Each person is cleverly exposed by an apparent "inspector", who digs deep into their conscious's and attempts to break through their upper-class moulds and uncover their own personal guilt from their actions which led to the death of a young woman, Eva Smith. The play was written in 1945 but based in 1912, Priestly did this because he believed that there were the same social divides evident in his modern day society and wanted to show in contrast to the audience the lack of change needed throughout the past decades and need for change for the future generation. I am going to explore how JB. Priestly presents his views on social responsibility in the play, to do this I will break down the social hierarchy into separate classes and explain each social status, rebellions and the inspector's unapparent class. The Birlings themselves regard themselves high up in the social hierarchy. To hold up their own moral superiority they present themselves with a look of success and step into their own premade clich� stereotypes as rich people by speaking highly of themselves. ...read more.

This shows a halt in their own generation and the symbolisation of Priestley's hope for the future generation, that people from all social classes will open their eyes to the situations of others, empathise with them and demolish the social hierarchy. Priestley's views on social responsibility are explicit as he shows the cyclical nature of the issues regarding the older generation in their society. This is shown through the ending of the play, where the police calls and Mr birling is told an inspector is on his way to ask some questions regarding the death of a girl on her way to the infirmary after swallowing some disinfectant. This represents that if there isn't an innovation or change in the status seeking upper-class of who gratify the incommensurated classes that the social hierarchy will live in an ever ending cycle, equality will be unknown and society will never change for the better. There are strong gender roles evident within the characters of an inspector calls, as in 1912 social stereotypes were stamped across the genders throughout civilisation. Sheila's character developed and altered significantly through the inspectors questioning. At the beginning of the play Sheila's character is categorised under her own jealous, emotional, materialistic gender stereotype as shown in her happiness in her engagement "you be careful - or I'll start weeping", crying symbolises weakness in a character and often women in 1912'th society were judged weak, emotional, and under men, ...read more.

matter what class nor social status, will and does have the chance to help someone less fortunate than themselves, and at whatever point in their life have they been anything less of kind to those apparently socially inferior to them it is never to late to change and reform into a better society, as seen by Sheila and Eric. In conclusion I believe Priestly was successful in his aim to demonstrate and express his own political and socialist views. As through the story he established the realism of the social classes and how it is possible to break free though those stereotypical moulds. As the younger generation in the Birling's began to challenge and undermine their parent's unjust authority and think for themselves without being controlled, by doing this he is showing the brighter side for the future generation and how he himself would like to within his power grasp society and show them the light through this play. I believe that upon a middle class person watching this play it would have affected them, perhaps not those in the same social stubbornness as the elder Birlings, but others would have been. I think this would have opened they're eyes to a poorer world below they're fancy lifestyles and the harsh realization of the desperate lives of the working class and might have been moved to do something, or at least stop in their prejudice towards those socially below them. ...read more.