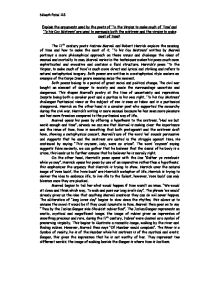 Explain the arguments used by the poets of 'To the Virgins to make much of Time' and 'To his Coy Mistress' are used to persuade both the mistress and the virgins to make most of time? The 17th century poets Andrew Marvell and Robert Herrick explore the meaning of time and how to make the most of it. 'To his Coy Mistress' written by Marvell portrays a more philosophical approach on these issues and challenge the ideas of sensual and mortality to man. Marvell varies in the techniques makes his poem much more sophisticated and evocative and contains a fluid structure. Herrick's poem 'To the Virgins, to make much of time' is much more direct and lyrical and striking and refers to natural metaphysical imagery. Both poems are written in a metaphysical style and are an example of the Carpe Diem genre meaning seize the moment. Both poems belong to a period of great social and political change. The civil war bought an element of danger to society and made the surroundings uncertain and dangerous. This shapes Marvell's poetry at the time of uncertainty and repression. Despite being both a cavalier poet and a puritan in his own right, 'To his Coy Mistress' challenges Puritanical views as the subject of sex is seen as taboo and is a puritanical disapproval. ...read more.

Marvell begins to talk what the mistress wants to hear, he makes simple things and ideas sound much more marvellous than they actually area, by appealing to her vanity. Marvell then says "And the last age should show your heart". Marvell leaves the heart till last; this leads us to assume that he has done to show that his love for her is greater than anything, saving the best till last. Both Herrick and Marvell use images of death to strengthen their argument. Herrick's poem binds the idea of youth and death together. "When youth and blood are warmer". The idea of youth is similar to the idea of time, when both are gone, they never come back. This leads us to assume that idea that once we are death, our blood is old, not young. This works to Herrick's advantage to convince the virgins that youth is important and must not be wasted. Marvell also explored the idea of youth and death. "While the youthful hue, sits on thy skin like morning dew". Marvell explores this more poetically, Marvell adopts the idea that youth will eventually evaporate and decay and leave us old. This also works to Marvell's advantage to convince the mistress to give up her virginity. Marvell explores this issue with more imagination where as Herrick lacks it and is more prosaic. Marvell explores the idea of death in much more depth than Herrick. ...read more.

Herrick simply needs to be straight to the point and direct, Herrick isn't trying to seduce anyone, and he is making a statement to persuade virgins to embrace life and live for happiness rather than the moment. Both Herrick and Marvell have to argue their situations; I believe that Marvell does it more interestingly. Marvell's argument is much more forceful, he morally believes that denial of pleasure is a waste and throughout his poem, argues to his mistress to end her denial of her body to him. As he seduces the mistress, he seduces the reader into understanding him. To make his argument effective, he uses ambiguity and may even be arrogant, yet he does this to ultimately seduce his mistress. Herrick's is much more urgent and delivers the argument to make most of time; therefore his poem must be quicker, more immediate and therefore less effort needed. In all, Marvell's poem is much more in-depth, sophisticated and imaginative, which make it more interesting to read, Herrick's poem is direct, ultimately this is because it doesn't need to be, however, it is much more prosaic and lacks a certain reality where as Marvell uses a variety of techniques such as slowing the tone down, use of sophisticated & ambiguous language make Marvell's poem much more effective. ?? ?? ?? ?? Nikesh Patel 11B ...read more.