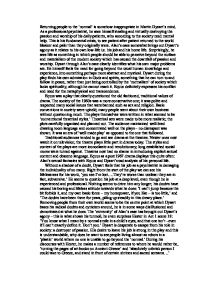 Explain the relationship between Dysart and normality in Equus.

Returning people to the 'normal' is somehow inappropriate in Martin Dysart's mind. As a professional psychiatrist, he sees himself stealing and virtually destroying the passion and worship of his daily patients, who according to the society need mental help. This is his fundamental crisis, to see patient after patient returned to the world bleaker and paler than they originally were. Alan's case somewhat brings out Dysart's agony as it relates to his own low-life i.e. his job and his home life. Surprisingly, he sees life as something in which people should be able to perceive beyond the surface and materialism of the modern society which has caused the downfall of passion and worship. Dysart through Alan's case clearly identifies what his own major problems are. He himself feels the need for going beyond the usual human knowledge and experience, into something perhaps more abstract and mystical. Dysart during the play finds his own admiration in Gods and spirits, something that he can turn to and follow in peace, rather than just being controlled by the 'normalism' of society which lacks spirituality, although he cannot reach it. Equus definitely expresses his conflict and need for the metaphysical and transcendence. Equus was a play that clearly questioned the old fashioned, traditional values of drama. The society of the 1960s was a more conservative one; it was polite and respected many social issues that were banned such as sex and religion. Basic conventions in society were upheld; many people went about their own business without questioning much. The plays themselves were written in what seemed to be 'conventional theatrical styles.' Theatrical sets were made to be more realistic; the plots carefully organised and planned out. The audience maintained well-bred drawing room language and concentrated well on the plays - no disrespect was shown. It was an era of 'well made play' as opposed to the one that followed. ...read more.

No paintings to show him how others have enjoyed it. No music except television jingles. No history except tales from a desperate mother,' shows how separate and unusual he is from the modern society. For Dysart, as we have seen, it his personal life. Alan's spirituality is what keeps him going, society doesn't exist for him. It is the 'core of his life' - this is what fascinates Dysart and makes him affinite for Alan's case. Scene 27 is an example where he displays how close he is to Alan. Dysart admits: 'I'd like to leave this room and never see it again in my life.' Alan observes his unhappiness, he understands that Dysart does not like what he does, and 'I don't actually enjoy being a Nosey Parker.' Dysart sees some sort of "light" in Alan because of his passion, even though the society would typically see him as a reject due to his crimes; it doesn't want to understand why people like Alan do what they do. Scene 35 is a critical scene in which Dysart explains sadly how he will cure Alan, 'I'll set him puttering off into the Normal world where animals are treated properly,' and 'I'll take away his field of Ha Ha, and give him normal places for his ecstasy.' Dysart finds Alan's case an unusual one. During his investigation and analysis of Alan, he cannot explain the motives behind Alan's crime - it is only the hypnosis that enables him to understand what has gone on properly. In a sense he acts like a film noir-ish detective who is drawn further into this entanglement of Alan's. There are certain points in the play that show this, for example at the end of scene 11 he says to the audience: 'It was then - that moment - I felt real alarm. What was it? At any rate, the feeling got worse with the stable owner's visit.' ...read more.

He look can also give the audience ominous feelings, 'He looks truculent.' Dysart's movement on stage can also create a striking effect as well as portray his true feelings. In the last scene for example, it describes him as moving 'swiftly' which shows a sudden emergency towards Alan (who by now is in complete pain after telling his story) again stimulating the audience's attention. The idea of Dysart 'steps(ing) out of the square and walks(ing) round the upstage end of it, storming' at the audience is almost metaphoric of him leaving his role. Although he 'storms,' (showing his frustration) he speaks passionately to the audience and maintains the calmness of the scene. The staging definitely adds more liveliness to the characters actions and emotions. In conclusion to Dysart's predicament, I feel spirituality and worship can definitely have a damaging consequence, hence Alan's crime. In some ways, 'normality' can remove this unworldliness creating a sort of dullness in ones life, but at the same time can make society more secure and peaceful in those cases like Alan's. It would be unfair to say the metaphysical always causes destruction, Dysart's view of Greece seems tranquil and relaxed, however, those like Alan need to be treated to preserve morality within the world. I don't agree with Dysart's view of the plain world, simply because it allows the freedom for those who keep to the laws - there is no ban on religion and peaceful worship. Pain is another aspect of Alan Dysart wishes to retain; even though he himself suffers through his work and home life. If as a psychiatrist he understands what it is like to experience this, why isn't he happy to 'numb' Alan's grief, regardless of the good he sees in worship? Overall, I feel spirituality should be in no way damaging or painful because it results in the suffering of the individual and others around, and this is why I disagree with Dysart's grudge against treating Alan, although I do not oppose the need for the abstract as this can provide happiness in ones life. ...read more.

This essay demonstrates thorough perceptive character analysis, well supported by textual references. However, it engages very little with the crux of the essay question: "the relationship between Dysart and normalcy", which only has any meaning here if placed in the context of the term as used in the play. An examination of the word "normalcy" as used by Shaffer in "Equus" is a vital part of a complete answer to this question. Much of the general character analysis could be cut to maintain reasonable essay length.

Paragraph construction and sentence control are generally well managed. However, judicious editing to combine some repeated material could reduce the length usefully.