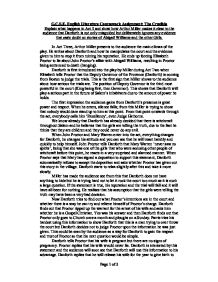 Explain what happens in Act 3 and show how Arthur Miller makes it clear to the audience that Danforth is not only misguided but deliberately ignores any evidence that casts doubt on stories of Abigail Williams and the other Girls.

G.C.S.E. English Literature Coursework Assignment: The Crucible Explain what happens in Act 3 and show how Arthur Miller makes it clear to the audience that Danforth is not only misguided but deliberately ignores any evidence that casts doubt on stories of Abigail Williams and the other Girls. In Act Three, Arthur Miller presents to the audience the main climax of the play. He writes about Danforth and how he manipulates the court and the evidence given to him to stop it from ruining his reputation. He ends up forcing Elizabeth Proctor to lie about John Proctor's affair with Abigail Williams, resulting in Proctor being sentenced to death (hanging). Danforth is first introduced into the play by Miller during Act Two when Elizabeth tells Proctor that the Deputy Governor of the Provence (Danforth) is coming from Boston to judge the trials. This is the first sign that Miller shows to the audience about how serious the trials are. The position of Deputy Governor is the third most powerful in the court (King being first, then Governor). This shows that Danforth will play a serious part in the future of Salem's inhabitants due to the amount of power he holds. ...read more.

Danforth then says that he will have to charge him with contempt of the court but Giles replies he can't as it was a hearing, not a trial. Danforth becomes very angry and call the court into full session. Mr Hale tries to encourage Danforth to stop what he is doing but Danforth is determined not to listen to anybody and has Giles arrested for contempt of the court. Proctor tells Giles he will be free when Mary makes her statement and Proctor introduces Mary into the situation. Before this happens, Hale tries to convince Danforth that because this charge goes to the very heart of the court, Proctor should have a lawyer, not continue the trial alone. Danforth begins to become impatient and asks whether Hale has any doubt on whether his justice is fair. Danforth could be asking this to make clear to everybody in the court room that he is being a fair judge and nothing else, not trying to get Proctor to give away key facts that he can use which a lawyer would not. From here Danforth calls for Abigail and the girls to be brought in he begins to question Mary, whether she was threatened by Proctor to sign the deposition and say she 'never saw no spirits'. ...read more.

There is no hope anymore. Danforth orders from there for Proctor and Corey to be take to jail. As can be seen throughout Act Three, Danforth has been playing with everybody and their words. He used them to gain information that would help him and at one point this nearly fails. That point was when he found out that there was dancing in the forests. From that point when Hathorne introduced Mary's fainting incidences, he played dirty and ended up using Elizabeth against Proctor. Forcing her to say her husband was not unfaithful. Even though he knew this was not true, he knew it was enough evidence to retain his reputation. After this Abigail made it worse and Danforth went along with her. Mary turned back to Abigail and left Proctor the only one to blame and so Danforth accused Proctor of making compact with the Lucifer and forcing Mary into making her statement and signing the deposition. Overall, Danforth is a judge who makes a mistake in the beginning who refuses to take the fall for it so he brings Proctor down instead by deliberately ignoring the evidence right in front of his face. This whole act was structured by Miller to create the scene where Danforth uses Elizabeth to create false evidence against Proctor. ?? ?? ?? ?? Page 1 of 3 ...read more.