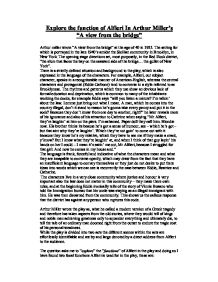 Explore the function of Alfieri In Arthur Miller's&quot;A view from the bridge&quot;

Explore the function of Alfieri In Arthur Miller's "A view from the bridge" Arthur miller wrote "A view from the bridge" at the age of 40 in 1955. The setting for which is portrayed in the late 1940's amidst the Sicilian community in Brooklyn, in New York. The opening stage directions set, most purposely, in the Red Hook district, "the slum that faces the bay on the seaward side of the bridge... the gullet of New York". There is a strictly defined situation and background to the play, which is also expressed in the language of the characters. For example, Alfieri, our subject character, speaks in a recogniseable manner of American-English, whereas the central characters and protagonist (Eddie Carbone) tend to converse in a style referred to as Brooklynese. The rhythms and patterns which they use show an obvious lack of formal education and deprivation, which is common to many of the inhabitants working the docks, for example Eddie says "will you listen a minute? I'm talkin' about the law. Lemme just bring out what I mean. A man, which he comes into the country illegal, don't it stand to reason he's gonna take every penny and put it in the sock? ...read more.

the old stories, where they would tell of kings and noble men achieving greatness only to squander everything and ultimately die, to tell the tale of an ordinary man doomed right from the outset to endure the tragic cost of his personal weakness. While the play is divided into two acts the different scenes within the acts are effortlessly identifiable and are by and large denoted by a direct address from Alfieri to the audience. The question asks me to "explore" the "functions" of Alfieri in the play and doing so I have found two focal functions Alfieri is used for in the play, these are: 1. To act as a character interacting and conversing to other characters in the play. And secondly 2. As a chorus set aside the stage to converse directly with the audience. Although it would appear that each function would pose individually it is not the case as it isn't fully possible to separate these functions completely as they overlay each other. Firstly I am going to "explore" Alfieri's function as a character in the play. Alfieri is the first and last person we here from in the play, he introduces it at the beginning and sets the ...read more.

In this scene Eddie is confronted with the suggestion of his own relationship with Catherine and marriage, this also rattles Eddie although this is not the only cause of loathing, the indication and surmising from Eddie's peers of Rodolfo's sexual legacy angers Eddie and leads to him questioning Rodolfo's motive for marriage. We learn something about Aflieri's character here also, which is the Italian-American lawyer. The fact that he is a lawyer lends some respectability and the confidentiality tells us he is trustworthy, we can see from this that alfieri is in a very judicious position in the play for here he can instruct Eddie as to what to do as an Italian-American who embraces fully the laws of the country which they have become a citizen. Alfieri is however aware of the morality and culture of the Italian society from which both Eddie and himself have grew up in. it is Alfieri's ability to see this story from both the Italian and an American which makes his viewpoint particularly significant. Arthur Miller uses Alfieri to unite these two cultures; the underprivileged, immigrant, labouring district on one side and the American law permit him state on the more prosperous, academic communities of Manhattan. And from this we can see as having "A view from the bridge". ...read more.