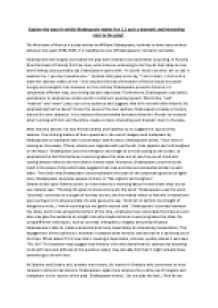 Explore the ways in which Shakespeare makes Act 1.1 of Merchant of Venice such a dramatic and interesting start to the play?

﻿Explore the ways in which Shakespeare makes Act 1.1 such a dramatic and interesting start to the play? The Merchant of Venice is a play written by William Shakespeare, believed to have been written between the years 1596-1598. It is classified as one of Shakespeare?s romantic comedies. Shakespeare both begins and makes the play both dramatic and somewhat surprising, In Antonio (the Merchant of Venice) first few lines, with Antonio confessing to his friends that lately he has been feeling unaccountably sad. Shakespeare opens with, ?In sooth I know not why I am so sad. It wearies me, / you say it wearies you.? Antonio later goes onto say, ?I am to learn, / And such a want-wit sadness makes of me.? One would think that a Merchant of Venice would be power hungry and energetic man however on the contrary Shakespeare presents Antonio in a completely different way; as to being sad and depressed. Furthermore, Shakespeare uses iambic pentameter to emphasise certain words in Antonio?s opening speech. Words like, ?sad?, ?wearies? and ?want? jump out to the audience and suggests that all is not well with Antonio. ...read more.

The simile that Shakespeare uses emphasises the scale of the undertaking and once again here, Shakespeare compares people to ships, in ?like signiors and burghers?. Solanio builds upon Salarino point, on how Antonio is worrying about his merchant ships out at sea. Solanio says, ?Plucking the grass to know where sits the wind.? Shakespeare uses the word ?plucking? connotes as a sought of nervous action; the line mainly refers to Antonio?s mental and even perhaps to his physical state. He also goes onto say, ?And not to bethink me straight of dangerous rocks, / which touching but my gentle vessels side.? Shakespeare?s contrast between the sharp, hard rocks and gentle bottom of the ship, emphasise how vulnerable the ships are and also may give the audience an insight into why maybe Antonio is worrying about his ships. By using different techniques, such as contrast, metaphors, imagery and personification Shakespeare is able to create a dramatic and more importantly an interesting conversation. This engagement of the audience is however increased when Antonio denies that he is sad because of his ships. ...read more.

And creep into the jaundice.? Shakespeare?s use of the simile at the start of line gives the sense that Antonio is old-fashioned and that perhaps Gratiano is taunting him. It also refers back to the point I made earlier about coldness and that Shakespeare is hyperbolizing the idea of coldness. Gratiano makes Antonio seem rather pathetic in the last line and the use of the worlds ?creep? and ?jaundice? conjure up the sense of disease and deformity. Gratiano's crass jokes reveal him to be less sensitive, despite the fact that he's a noble Venetian. This part of the play is interesting because Shakespeare creates an interesting conversation between the two men and perhaps gives an insight into Venetian society and perhaps poses the question about who is civilised and who is not. The last section of the play is when Antonio?s friend, Bassanio enters and discusses his plans to woo Portia, a wealthy but also a beautiful woman. Shakespeare here introduces the vivid idea of love and money and remarkably builds begins to build up upon the Antonio Bassanio relationship. Bassanio says, ?Hath left me gaged. To you, Antonio, / I owe the most in money and in love,/ And from you love I have a warranty. ...read more.