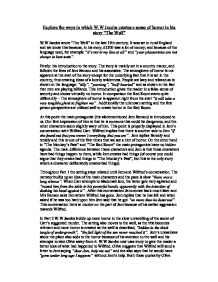 Explore the ways in which W.W Jacobs creates a sense of horror in his story &quot;The Well&quot;.

Explore the ways in which W.W Jacobs creates a sense of horror in his story "The Well" W.W Jacobs wrote "The Well" in the late 19th century. It was set in rural England and we know this because, in his story, �1500 was a lot of money; and because of the language used, for example "it's not in my line at all" and "your pleasantries are not always in best taste". Firstly: his introduction to the story. The story is mainly set in a country manor, and follows the lives of Jem Benson and his associates. The atmosphere of horror is not apparent at the start of the story except for the underlying fact that it is set in the country, thus creating ideas of a lonely wilderness. People are lazy and relaxed as is shown in the language: "idly", "yawning", "half-hearted" and as shown in the fact that men are playing billiards. This introduction gives the reader in a false-sense of security and shows virtually no horror. In comparison the Red Room starts quite differently - The atmosphere of horror is apparent right from the start "it will take a very tangible ghost to frighten me". Additionally the unknown setting and the first person perspective are utilised well to create horror in the Red Room. ...read more.

These differing ideas create tension as the reader wonders why Jem is like this. Varying paces are also used to gradually build the tension. At the beginning time passes slowly "a long silence" and long sentences are used. This suggests to the reader that something is about to happen. The pace gets faster and faster until lines such as "breathlessly" and "springing up" are used. Short sentences and exclamation marks are also employed to increase the pace. This compares with "The Monkey's Paw" where more quick sentences and strong, demanding language "Wish!" are utilised. The use of a sound of knocking is also employed well in the Monkey's Paw to create a faster pace. A pathetic fallacy is now used to create horror and a sense of helplessness. Olive loses her diamond bracelet and Jem starts to repeat the words "your bracelet" over and over again as if he's trying to realise what's happened. Jem now says that she can have the bracelet back as long as she doesn't tell anyone about it. This suggests that Jem is hiding something down the Well and creates more horror. More irony is now created when Olive describes how horrible it would be to be down the well "fancy going round and round like a mouse in a pail, clutching at the slimy sides, with the water filling your mouth, and looking up to the little patch of sky above". ...read more.

This silence is an echo of all the other tense silences in the story and reminds the reader of Jem. Overall W.W Jacobs creates a sense of horror in a lot of different ways in his story "The Well". One of these ways is in his use of an omniscient narrator throughout the story, but only allowing the reader to see a limited perspective. In addition he distances us from the story and this creates tension because information is withheld. In contrast "The Red Room" is written in the first person. Both ways work well: a story written in the third person shows the wide scale of things so that you have more knowledge of the goings on; while a story written in the first person illustrates what happens to one person and their thoughts on it. The other ways he creates horror are in his good use of characters, setting, structure and language. He slowly builds up horror throughout the story until a climax at the end, revealing more hints and clues as to what is really happening as the story progresses. His use of an extremely complex protagonist with more than one side to him also creates horror, as does his good use of pace to build up tension. On the whole, horror is created well and without any unnecessary revealing of knowledge in every aspect of the story. ...read more.