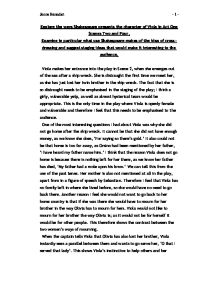 Explore the ways Shakespeare presents the character of Viola in Act One Scenes Two and Four.

Explore the ways Shakespeare presents the character of Viola in Act One Scenes Two and Four. Examine in particular what use Shakespeare makes of the idea of cross-dressing and suggest staging ideas that would make it interesting to the audience. Viola makes her entrance into the play in Scene 2, when she emerges out of the sea after a ship wreck. She is distraught the first time we meet her, as she has just lost her twin brother in the ship wreck. The fact that she is so distraught needs to be emphasised in the staging of the play; I think a girly, vulnerable yelp, as well as almost hysterical tears would be appropriate. This is the only time in the play where Viola is openly female and vulnerable and therefore I feel that this needs to be emphasised to the audience. One of the most interesting questions I had about Viola was why she did not go home after the ship wreck. It cannot be that she did not have enough money, as we know she does, 'For saying so there's gold.' It also could not be that home is too far away, as Orsino had been mentioned by her father, 'I have heard my father name him.' I think that the reason Viola does not go home is because there is nothing left for her there, as we know her father has died, 'My father had a mole upon his brow.' ...read more.

Therefore I think Viola chooses to be in disguise so she can mourn alone and in her own way. There is also the factor that as she will be busy being a servant and will not have time to dwell on thoughts of her brother. It is as if she is trying to create a safe haven for herself to recover in. She is making herself invisible to the rest of the world till she is ready to face them as herself again. By dressing up as a man Viola is also essentially becoming Sebastian, as she will look like him and when she looks in the mirror she will see him. It is a way of combining herself and her twin into one body and letting him live on. I think it is important that this part of Scene two where she decides to live as a man in Illyria is staged appropriately so it does not seem too much of a random thought for Viola to have. The way I would do this is by having Sebastian's trunk on the edge of the shore, as though it has drifted in from the shipwreck. This way it will look as though Viola has seen the trunk and as well as getting memories of Sebastian from it, she will also think of this idea of cross dressing to be a man. ...read more.

This reminds the audience that Cesario is a girl and lets the audience know Viola's feelings for Orsino, adding more confusion to the already confused plot. She notifies the audience that her feelings will make wooing Olivia on behalf of Orsino an even more of a difficult task than it already is. However Viola is still going to carry out this task showing her braveness, as well as how she would do anything for him. It is an almost selfless act, as if she does manage to make Orsino's love for Olivia requited, she will never have her wish of marrying him. In conclusion I think Shakespeare presents Viola in a brave, caring way, which has led to her being considered as one of Shakespeare's golden girls. She is almost shown to be a heroine. The reason I think she has being presented by Shakespeare like this is to show the contrasts in the Elizabethan society between people of different natures as well as status. The fact that Viola decides to cross dress also ties in with it as the fact she that she is brave and a conformist, as this is what she is doing when she cross dresses. However I do feel that for all these ideas about Viola's character to come across affectively to the audience these scenes need to be staged appropriately. ?? ?? ?? ?? Jenna Benedict - 1 - ...read more.