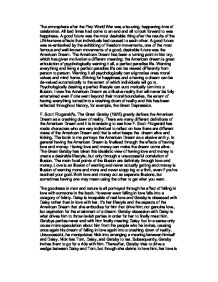 The atmosphere after the First World War was a buzzing, happening time of celebration. All bad times had come to an end and all to look forward to was happiness. A good future was the most desirable thing after the results of the UN-humane effects that individuals had caused to each other. A good future was re-embarked by the exhibiting of freedom movements, one of the most famous and well-known movements of a good, desirable future was the American Dream. The American Dream has been a turning point in history, which has given motivation a different meaning; the American dream is great articulation of psychologically wanting it all, a perfect paradise life. Wanting everything and living a perfect paradise life can be viewed differently from person to person. Wanting it all psychologically can stigmatise ones moral values and mind frame. Striving for happiness and a having a dream can be de-valued automatically to the extent of which individuals will go to. Psychologically desiring a perfect lifestyle can automatically turn into a illusion. ...read more.

Love is an illusion of wanting and never actually getting and money is illusion of wanting more and more and never stopping at a limit, even if you've reached your goal. Both love and money act as separate illusions, but sometimes having one may mean using the other to get what you want. The goodness in man and nature is all portrayed through he effect of falling in love with someone in the book. However even falling in love falls into a category of falsity. Daisy is incapable of real love and Gatsby is obsessed with Daisy rather than in love with her. It's her lifestyle and the aspects of the American Dream that she embodies for him that drive him; not genuine love, but aspiration for the attainment of a dream. Gatsby obsession with Daisy is what drives him to throw lavish parties in order for her to finally meet him. Gatsbys parties never end with him finally meeting Daisy but in a sense only cause more speculation about him from the people who he invites, causing once again his dream of falling in love again into a crashing down of reality. ...read more.

The only time Gatsby will ever realise his dream of having Daisy is non - existent is when his dream falls in front of his eyes. Daisy will never be with as his conceptualisation of material things, as they manage to stay with him until the day of his death. Gatsby's reality was all based upon and driven from an illusion. As John Henry states '' Gatsby was obsessed with the hunger of human life and driven by the search to make that wonder actual'' Gatsby wonder will always remain a dream and his actual reality will always be the material world around him. The book has taken this illusion of love and fitted it into the equation of the way in which the American Dream is portrayed. All the characters at some point fall in love, this love is never shared and is always remained as false. Just how in a great sensation wanting the American Dream is never a reality and only adds up to making a illusion exist. Two characters, which I greatly feel, do exemplify American Dream are Jay Gatsby and Tom Buchanan. Tom and Gatsby are both great examples of the American Dream. ...read more.