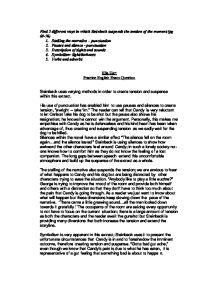 Find 5 different ways in which Steinbeck suspends the tension of the moment (pg 69-76) 1. Stalling the narrative - punctuation 2. Pauses and silence - punctuation 3. Description of sights and sounds 4. Symbolism- light/darkness 5. Verbs and adverbs Ella Hart Practice English Exam Question Steinbeck uses varying methods in order to create tension and suspense within this extract. His use of punctuation has enabled him to use pauses and silences to create tension, "awright - take 'im." The reader can tell that Candy is very reluctant to let Carlson take his dog to be shot but the pause also shows his resignation; he knows he cannot win the argument. Personally, this makes me empathise with Candy as he is defenceless and his kind heart has been taken advantage of, thus creating and suspending tension as we sadly wait for the dog to be killed. Silences within the novel have a similar effect "The silence fell on the room again...and the silence lasted" Steinbeck is using silences to show how awkward the other characters feel around Candy; in such a lonely society no-one knows how to comfort him as they do not know the feeling of a lost companion. ...read more.

It represents the end of the dog's life and the end of Candy's companionship. We instantly know that the dog will die as death and hopelessness have been denoted, we are just waiting for it to happen, creating suspense. However, the entrance of Whit provides Candy with a false hope; Whit could distract from the topic of the dog and make everyone forget. During this entire part it is very tense for both Candy and the reader, Candy is hoping in desperation that Carlson will be sidetracked and let the dog live on for another day and the reader awaits in suspension to find out what happens. The symbolism of darkness is used again "He led the dog out into the darkness." Carlson has finally got his way and Candy's efforts proved to be in vain, the dog is being led out to its death, and there is no hope for it now. Steinbeck's use of both verbs and adverbs help to suspend the tension within this extract 'He pointed with his toe.' Carlson is being very blunt about his plans to shoot the dog, showing very little consideration to the thoughts and feelings of Candy. ...read more.

'Carlson's footsteps died away.' As long as the characters (especially Candy) could still hear Carlson walking they knew that the dog was not yet dead. As a reader, the end of his footsteps left me knowing that the dog only had a matter of seconds left to live, forming suspense as we wait for his death. 'A shot sounded in the distance' This is a turning point in the extract, throughout the pages we have been waiting tensely for the death of the dog and at this point we are no longer hoping that Carlson will change his mind because we know it is too late. All the tension that has been suspended is released although the unease felt in the room deepens as the characters sympathise with Candy but do not know how to appease the situation. Throughout this extract Steinbeck has suspended the tension by use of pauses & silences, the stalling of the narrative, symbolism, verbs & adverbs and descriptions of sounds. He has provided Candy with small amounts of false hope but these proved futile. I personally think that the tension and suspense was very apparent and as I read I empathised with Candy and was anxious about his dog. ?? ?? ?? ?? ...read more.