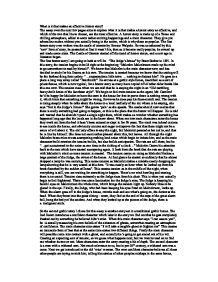 What is it that makes an effective Horror story? The essay over the next few pages aims to explore what it is that makes a horror story so effective, and which of the two that I have chosen, are the most effective. A horror story is made up of a Tense and chilling atmosphere, added to some rather exciting happenings and a main character. They give you adrenaline rushes without you actually being in the action, which is why there so popular. The first horror story ever written was the castle of otronto by Horace Walpole. He was so ashamed by this 'new' form of story, he pretended at first it wasn't his, then as it became really popular, he owned up and made some more. The Castle of Otronto started off the trend of horror storys, and a new age in literature began. The first horror story I am going to look at will be "The Judge's house" by Bram Stoker in 1891. In this story, the tension begins to build right at the beginning "Malcolm Malcolmson made up his mind to go somewhere to read by himself". We know that Malcolm is the main character now, and has decided to study for his Exams on his own. The tension is created because we know that the setting will be the farthest thing from safety. ...read more.

When the alarm goes off in the Judge's house, crowds rush and see what's going on, the doctor at the head. When they burst into the great dining - room, they find at the end of the rope of the great alarm bell, hung the body of the student. And when they looked up at the picture of the Judge, there is a malignant smile. So the second gothic story I chose for this essay is another story set in a traditional gothic house. The Red Room introduces a confident character which later in the story we find out that he gets completely freaked out by something he believed didn't exist. When this main character says "I can assure you", he is actually reassuring his own beliefs of the existence of ghosts, somewhat creating an atmosphere of confidence. The main character also states "It will take a tangible ghost to frighten me" This creates an innuendo form of fear that at the same time states two different things. Firstly the main character will possible come into contact with a ghost, and secondly he's going to get scared out of his wit. Creating an expecting sort of tension, so we guess what happens next, but we want to read on to find out whether its true or not. More characters enter the story creating a bit of depth. ...read more.

Then some candles go out, leaving us thinking, "Is this it? Is there a ghost stood there?" We then find out he's extremely scared because he lights a match with 'quivering haste.' As more candles have gone out leading us to believe that it is a ghost's doing. The tension is rising rapidly now. Then he 'screamed with all my might-once, twice, thrice.' We have now established that he has given up and is too scared. He starts shaking and trying to find the door but he can't remember where the door is and he is scared of the dark. We know that he is losing his mind. He then had a "heavy blow" to his forehead and couldn't remember any more. The tension lowers and we begin to feel comfortable again. We now realize that he was walking into things and scaring and damaging himself. Apparently, what was haunting the room was fear. And this ends the story with the tension at high. I have studied these stories carefully and have found it hard to decide which story is the most effective, but I have decided that The Judge's House is the most effective as it leaves you with a scary scene. A student hanging there dead, whereas The Red Room ends quite happily and everybody survives. I feel that I enjoyed reading The Red Room more but found I was gripped more to The Judge's House. ...read more.