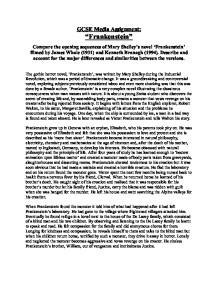 Frankenstein - Compare the opening sequences of Mary Shelley's novel 'Frankenstein' filmed by James Whale (1931) and Kenneth Branagh (1994). Describe and account for the major differences and similarities between the versions.

GCSE Media Assignment: "Frankenstein" Compare the opening sequences of Mary Shelley's novel 'Frankenstein' filmed by James Whale (1931) and Kenneth Branagh (1994). Describe and account for the major differences and similarities between the versions. The gothic horror novel, 'Frankenstein', was written by Mary Shelley during the Industrial Revolution, which was a period of dramatic change. It was a groundbreaking and controversial novel, exploring subjects previously considered taboo and even more shocking was that this was done by a female author. 'Frankenstein' is a very complex novel illustrating the disastrous consequences when man messes with nature. It is about a young Swiss student who discovers the secret of creating life and, by assembling body parts, creates a monster that vows revenge on his creator after being rejected from society. It begins with letters from the English explorer, Robert Walton, to his sister, Margaret Saville, explaining of his situation and the problems he encounters during his voyage. One day, when the ship is surrounded by ice, a man in a bad way is found and taken aboard. He is later revealed as Victor Frankenstein and tells Walton his story. Frankenstein grew up in Geneva with an orphan, Elizabeth, who his parents took pity on. He was very possessive of Elizabeth and felt that she was his possession to love and protect and she is described as his 'more than sister'. Frankenstein became interested in natural philosophy, electricity, chemistry and mathematics at the age of nineteen and, after the death of his mother, moved to Inglostadt, Germany, to develop his interests. He became obsessed with natural philosophy and the principle of life. After four years of study he has learned enough to 'bestow animation upon lifeless matter' and created a monster made of body parts taken from graveyards, slaughterhouses and dissecting rooms. Frankenstein showed tenderness to his creation but it was soon obvious that he had made a mistake and created a horrible creature. He fled the laboratory and on his return found the monster gone. ...read more.

Bearing in mind these limitations, older films are very impressive and can still be enjoyed today. If I were making this film I would try to stay as true to Mary Shelley's book as possible as I think it is an impressive book telling a great story of tenderness, fear and love. It also has hidden morals that I would like to get across in my film adaptation. The main one being what happens when man messes with nature and tries to take the place of God. This fits in with arguments about cloning and genetically modified plants that are currently going on today. There is also the less obvious theme of society's rejection of anything other than the ordinary. My film adaptation would hopefully show these themes and stay loyal to the original text. To start my film I would have a voice over of parts of the first letter while we see Walton making his way to the North Pole much like the start of Branagh's version. I might follow him from earlier in the journey so to include the great and noble story of 'the master' mentioned in the second letter. I would also include dialogue between Walton and Dr Frankenstein to give us an important insight into the character of Robert Walton. When Frankenstein tells his story I would like to incorporate the story of his mother and father as I think this is quite important because Frankenstein and Elizabeth repeat it. From my film opening I would want to achieve a powerful storyline that kept as true to Mary Shelley's book as possible. In some instances I would have to adapt and change the order in which things occur. To link certain events I would have to invent a storyline that lets the viewer know events, which are mentioned in the letters, without repeated use of voiceovers. I would try and use the music to create atmosphere, link scenes and highlight important parts of the story. ...read more.

The next, and final scenes that I will be comparing both include people trying to dissuade others from allowing themselves to be so driven by their ambition that they will not consider the consequences. In the earlier version it is Elizabeth, Victor and the professor or are trying to stop Frankenstein from creating this monster. In the 1994 adaptation it is Frankenstein who is advising Walton against continuing with his voyage. Although at first glance these two film adaptations are completely different, there are many parallels. These are usually not in the actual storyline but in the way it is told and the methods used by the directors to captivate and horrify their audience. When I first watched these two films I greatly preferred the later, Kenneth Branagh, version, but when I consider the limitations of the time period James Whale's 'Frankenstein' was produced in, I am forced to greatly admire his achievement. He has created an epic gothic horror, which will be long remembered, this is something that Branagh has failed to do. Although his film is stunning both visually and in effects and acting, it doesn't include characteristics that would make a classic film and I think that no one could represent the monster better than Boris Karloff. Although I find Branagh's 1994 film interpretation more watchable, this is probably only because this style of film and filming is what I am used to. On greater inspection James Whale's 1931 adaptation cannot fail to amaze the viewer with its ability to still captivate the modern viewer. However I would have liked to see more character depth, as I believe that is a vital part of Mary Shelley's novel. 'Frankenstein' is a very clever and complicated novel and I think that both directors have done admirably to successfully adapt it for a film and convey they moral aspects. However, I consider both adaptations inferior to Mary Shelley's book but the film adaptations, although very different, both contain powerful images that create a lasting impression on the viewer. ...read more.