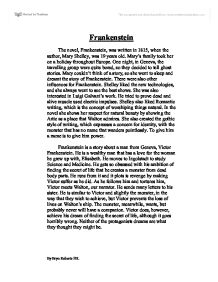 Frankenstein The novel, Frankenstein, was written in 1815, when the author, Mary Shelley, was 19 years old. Mary's family took her on a holiday throughout Europe. One night, in Geneva, the travelling group were quite bored, so they decided to tell ghost stories. Mary couldn't think of a story, so she went to sleep and dreamt the story of Frankenstein. There were also other influences for Frankenstein. Shelley liked the new technologies, and she always went to see the best shows. She was also interested in Luigi Galvani's work. He tried to prove dead and alive muscle used electric impulses. Shelley also liked Romantic writing, which is the concept of worshiping things natural. In the novel she shows her respect for natural beauty by showing the Artic as a place that Walton admires. She also created the gothic style of writing, which expresses a concern for identity, with the monster that has no name that wanders pointlessly. To give him a name is to give him power. Frankenstein is a story about a man from Geneva, Victor Frankenstein. He is a wealthy man that has a love for the woman he grew up with, Elisabeth. He moves to Ingolstadt to study Science and Medicine. He gets so obsessed with his ambition of finding the secret of life that he creates a monster from dead body parts. ...read more.

Victor Frankenstein, the main character, or protagonist, is an ambitious man from Geneva. He dreams of finding the secret of life. Once he arrives in Ingolstadt, his university, he finds his work uncontrollably consuming his life. He begins with research, how he can make the 'perfect' man from dead flesh. He decides he can sew the perfect limbs together. Then he uses the natural power of lightning (with pathetic fallacy as storms are intimidating and come on only dreary nights [It was a dreary night in November]) to put an electric shock into the dead body. This is what he believes is the secret of life. He believes his task is filled with "delight and rapture", this means that before he sees the monster alive, he believes that he has already had great success over so much labour. Shelley also puts his actions into a god-like figure, which can create and destroy life as he wishes. Shelley also uses religious words, such as rapture, creator, species and even later on, demonical. Victor soon realises that his experiment is a massive failure. He expected a perfect, clever human to be produced, but he got a scarred monster that he describes as wretch. He inflicts pain, mainly emotionally, on it, by running away. As it cannot speak, the monster is left alone for dead. ...read more.

Shelley also uses the monster as a way of pointing out human flaws. She shows that no matter how different someone is, another person will always find faults or be intimidated by someone else. Frankenstein also has a subtitle; it is also named "The Modern Prometheus". The classical story is about a human named Prometheus, who steals fire from the god Zeus to have an advantage over animals. This causes only pain and suffering for animals. In the modern Prometheus, Frankenstein is Prometheus as he defies the gods and takes their role as creator. As comeuppance, he is chained to a rock and his liver was eaten by an eagle every night, just to be healed at daybreak. This is a symbol for the ongoing pain of both Frankenstein and the monster. Even though, as the novel says, ambitions results in nothing other than pain, the advancement in modern medicine is an amazing feat. It has, meanwhile, sparked controversy, with subjects like stem cell research that could potentially be harming living organisms. The character that I favour most is the monster as he has been through nothing but pain throughout his entire life, whereas the other protagonists have been fed with a silver spoon. I think that the novel of the story is that if you are willing to put everything at risk to succeed, be prepared to fail. ?? ?? ?? ?? By Bryn Roberts 10L ...read more.