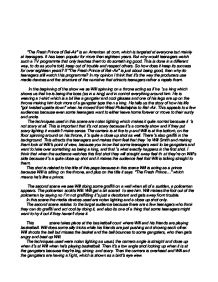 "The Fresh Prince of Bel-Air" is an American sit com, which is targeted at everyone but mainly at teenagers. It has been popular for more then eighteen years. But why would teenagers watch such a TV programme that only teaches them to do something good. This is done in a different way, to do as you're told, keep out of trouble and respect others. So how does it keep its success for over eighteen years? If "The Fresh Prince of Bel-Air" is just about being good, then why do teenagers still watch this programme? In my opinion I think that it's the way the producers use media devices and the structure of the narrative that attracts teenagers rather a repels them. In the beginning of the show we se Will spinning on a throne acting as if he's a king which shows us that he is being the boss (as in a king) and in control everything around him. He is wearing a t-shirt which is a bit like a gangster and cool glasses and one of his legs are up on the throne making him look more of a gangster type then a king. He tells us the story of how his life "got twisted upside down" when he moved from West Philadelphia to Bel-Air. ...read more.

This scene takes place at the basketball court where Will and his friends are playing basketball. Will does some silly tricks while his friends are just pushing and shoving each other. Will shoots the ball but misses the basket and the ball bounces to some gangsters, who then gets angry and beat up Will. The techniques used were notan lighting as usual, the camera angle is straight and close up when it's at Will when he's playing basketball. Then it's a low angle shot looking up when it is at the gangsters because they're big, strong and scary. Then the camera is overhead and Will and the gangsters are having a fight, which is shown as a bird's eye view. When Will is playing basketball he tries to do these cool moves and shoot the ball in the basket but misses which shows he's not actually cool. Will also tries to be a gangster but when he faces the real gangsters he gets scared. This relates to the target audience because this shows how most teenagers act like, because some teenagers act really cool and talk in slang but when it comes to a challenge or something they get scared back away. If you look close at Will's friends, they are actually a bit stupid because when Will is just standing in one place and doing his tricks, his ...read more.

In my opinion I think that Will is getting happy that he is going to his aunty and uncle who are rich and then says "yo home smell you later" that also suggests that he is happy to leave west Philadelphia and move to Bel-Air. This appeals to the target audience because some teenagers get bored at home or have a fight with their parents and feel like that they want to leave home and go somewhere else where they would be happier. In conclusion I think that will smith is trying to be a gangster and fit in the west Philadelphia, but what we see is actually happening in the show. We see will trying to be a gangster by doing graffiti, playing basketball...but that's not all, we also see Will doing as his mum says like when she said that he had to move to Bel-Air, he does as he's mum tells him to do. If you really think about it there are quite subliminal messages in the opening sequence. So you see in one way Will tries to be a gangster and show off but in the other hand he also listens to his mother. So this shows that pupil can be gangster in school or outside, but also listen to their parents. Essay done by Jaydeep hasmukhlal. ?? ?? ?? ?? ...read more.