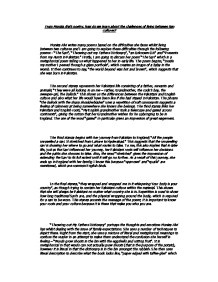 From Moniza Alvi's poetry, how do we learn about the challenges of living between two cultures?

From Moniza Alvi's poetry, how do we learn about the challenges of living between two cultures? Moniza Alvi writes many poems based on the difficulties she faces whilst living between two cultures and I am going to explore these difficulties through the following poems: - "The Sari", "Throwing out my Fathers Dictionary", "an Unknown Girl" and "Presents from my Aunts in Pakistan." Firstly, I am going to discuss her poem "The Sari" which is a metaphorical poem telling us what happened to her in early life. The poem begins, "Inside my mother I peered through a glass porthole", which creates an image of a baby in the womb. It then continues to say, "the world beyond was hot and brown", which suggests that she was born in Pakistan. The second stanza represents her Pakistani life consisting of a father, servants and animals; "They were all looking in on me - Father, Grandmother, the cook's boy, the sweeper-girl, the bullock." This shows us the differences between the Pakistani and English culture and also what her life would have been like if she had stayed in Pakistan. The phrase "the bullock with the sharp shoulderblades" uses a repetition of soft consonants suggests a feeling of calmness at being somewhere she knows she belongs. ...read more.

This puts forward the idea that this old book is precious to her and no one else, and tarragon (which is a Pakistani spice) reminds us once again of her culture. Also the shortness of the sentence "I retrieve it", mimics the effect of a real person speaking aloud, and creates a distinctive sounding voice. This has the effect of allowing the reader become more involved in the story Moniza Alvi is trying to tell them. "My father's dictionary - not quite finished with." To me, this suggests that her father died before he finished learning English - which would explain why the book was so precious to Moniza Alvi. It is in the final stanza that we learn about her own attempts to learn her father's language through buying her own dictionary. "I have my own, weightier with thousands of recent entries arranged for me." Because there are so many new entries this suggests that much time has passed since her father was learning the language, and shows us that she's never really tried to learn his language until now. "I daren't inscribe my name." This implies that she is afraid of letting her father down, so she is not prepared to put her name to it for fear of being recognised if she fails. ...read more.

Also, both cultures hold different values and she expresses her trouble at knowing which values she held for herself and she mentions animal cruelty to explain this "I wanted my parents' camel-skin lamp- switching it on in my bedroom, to consider the cruelty and the transformation from camel to shade". The challenge of having two different lifestyles - one in Pakistan and one in England is shown by the phrase "Sometimes I saw Lahore - my aunts in shaded rooms, screened from male visitors". She sees her aunts in the mirrors sewn into her Salwar Kameez and she attempts to recreate herself in their culture. As you can see, Pakistani beliefs are very different to those held by the English. Moniza Alvi's poetry is deeply influenced by her cultural influences. This is obvious because the majority of her poetry is based on the difficulties of living between two cultures. Her poetry is also influenced by fashions in writing. Her style is very modern and contrasting to pre-20th century poets, and this enhances younger reader's appreciation of the text. In conclusion, Moniza Alvi was privileged to have lived between two cultures because it meant that she was welcomed into two communities and had the opportunity to experience different ways of life. However, all good things come at a price and for this she suffered the issues of not knowing where she fit in, which values she held and having high family expectations. Abbie Taylor ...read more.