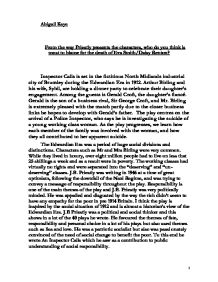 From the way Priestly presents the characters, who do you think is most to blame for the death of Eva Smith/Daisy Renton?

Abigail Kaye From the way Priestly presents the characters, who do you think is most to blame for the death of Eva Smith/Daisy Renton? Inspector Calls is set in the fictitious North Midlands industrial city of Brumley during the Edwardian Era in 1912. Arthur Birling and his wife, Sybil, are holding a dinner party to celebrate their daughter's engagement. Among the guests is Gerald Croft, the daughter's fianc�. Gerald is the son of a business rival, Sir George Croft, and Mr. Birling is extremely pleased with the match partly due to the closer business links he hopes to develop with Gerald's father. The play centres on the arrival of a Police Inspector, who says he is investigating the suicide of a young working class woman. As the play progresses, we learn how each member of the family was involved with the woman, and how they all contributed to her apparent suicide. The Edwardian Era was a period of huge social divisions and distinctions. Characters such as Mr and Mrs Birling were very common. While they lived in luxury, over eight million people had to live on less that 25 shillings a week and as a result were in poverty. The working classes had virtually no rights and were separated into the "deserving" and "un-deserving" classes. J.B. Priestly was writing in 1946 at a time of great optimism, following the downfall of the Nazi Regime, and was trying to convey a message of responsibility throughout the play. Responsibility is one of the main themes of the play and J.B. Priestly was very politically minded. He was appalled and disgusted by the way the rich didn't seem to have any empathy for the poor in pre 1914 Britain. I think the play is inspired by the social situation of 1912 and is almost a historian's view of the Edwardian Era. J.B Priestly was a political and social thinker and this shows in a lot of the 40 plays he wrote. ...read more.

He appears to be very slick. He is quite assertive towards people he has authority over, "Don't look like that Sheila". He is anxious to get into Birling's good books, "...we'd have done the same thing..." He also has very little sympathy with the working class, "they'd be all broke", and this shows that he and Birling are alike. He also is ultimately motivated by money and profit. Like Mr and Mrs Birling, Gerald's first impulse is to disguise his involvement with Eva; but unlike them, he does actually show genuine remorse when the news of her death finally sinks in. Furthermore we see that he helped Eva out of genuine compassion and didn't take advantage of her in the same violent and drunken way that Eric did. Gerald did make Eva openly happy for a time, and in many ways is the least to blame for her death. He resents Sheila hearing what he did, "I think Miss Birling ought to be excused." He knows their relationship will be over if she finds out how he betrayed her, but at the end of the play he seems to anticipate Sheila accepting the engagement ring again and affirms all is now well, "Everything's all right now, Sheila. What about this ring?" He admits he was wrong to use Eva as a love, "She didn't blame me". He seems concerned about Eva's welfare, for instance he says, "She said, that she thought of leaving Brumley. Whether she did or not I don't know. Did she?" He also shows some emotion, "I'm rather more upset by this business than I probably appear to be." But as soon as he realises the Inspector is a fake, he is foolish enough to assume everything is back to normal again. The male members of the family generally empathise with Gerald. As an example Birling tries to make Gerald's affair less appalling by saying that " a lot of young men..." ...read more.

Nevertheless the two characters who stick out the most are Eric and Mrs Birling. She was evil, unforgiving and turned Eva away at her hour of need and Eric treated her like a prostitute. He managed to get her pregnant, then ran away because she refused his money. I feel that after examining the evidence against both characters that it is Eric who is most to blame. Mrs Birling was utterly evil and disgustingly pompous, but at the same time I pity her. She obviously was brought up among a society that demanded that she behaved in a certain way. She just became too indulgent in her own ideals, and locked herself into a vicious circle from which she couldn't escape. When she married Mr. Birling, she married below her class. To convince herself that he was just as "stately" as she was, she set up screens around herself and her family. She lied so much to herself that she began to believe that what she thought was right. She justified her own actions, by simply ignoring the truth. But on the other hand, Eric tried to escape from the world in which he grew up. He became a spoilt brat, spurred on by the idea of rebellion. He had no need to wreck Eva's life, but for a few nights of passion he couldn't care less. He was not educated about the "outside world", and acted like many young gentlemen of the upper-classes would have done. But he was na�ve and foolish to think that he could watch life pass by, without growing up and seeing things as they should be. He deliberately stole, lied and blundered his way through those few months, not caring about the consequences. That, to me, is enough to find him guilty of driving Eva to commit suicide. Although it could be argued that he didn't directly affect Eva's actual suicide, I believe he was the "straw that broke the donkey's back". VI I ...read more.