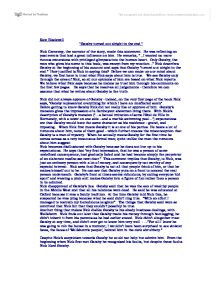 Gatsby turned out alright in the end

Kate Blackwell "Gatsby turned out alright in the end." Nick Carraway, the narrator of the story, made this statement. He was reflecting on past events that had a great influence on him. He remarks, "...I wanted no more riotous excursions with privileged glimpses into the human heart. Only Gatsby, the man who gives his name to this book, was except from my reaction..." Nick describes Gatsby at the beginning of his account and says that Gatsby "turned out alright in the end." How justified is Nick in saying this? Before we can make up our mind about Gatsby, we first have to trust what Nick says about him is true. We see Gatsby only through the eyes of Nick, so all our opinions of him are based on what Nick reports. We believe what Nick says because he makes us trust him through his comments on the first few pages. He says that he reserves all judgements - therefore we can assume that what he writes about Gatsby is the truth. Nick did not always approve of Gatsby - indeed, on the very first page of the book Nick says, "Gatsby represented everything for which I have an unaffected scorn". ...read more.

He said he was educated at Oxford because it was a family tradition. At the time Gatsby told Nick this, he suspected he was lying because what he said didn't ring true. "With an effort I managed to restrain my incredulous laughter". The things that Gatsby said were so contrived that Nick felt that they couldn't possibly be true. Another thing that makes Nick dislike Gatsby is his shady business dealings, with Wolfsheim. Nick finds out later that Gatsby made his money through bootlegging; he didn't inherit it from his parents as he had earlier stated. Nick didn't altogether trust Gatsby at any time, and didn't ever get to know him very well - ..."For all I knew he was going to rob the house in a moment; I wouldn't have been surprised to see sinister faces, the faces of 'Wolfsheim's people', behind him in the dark shrubbery." Despite Nick's scepticism towards Gatsby he could not help but admire him. From the beginning when Nick first met Gatsby he recognised his faults, but despite these faults Nick liked Gatsby. Nick is attracted to Gatsby's bright and understanding smile. ...read more.

Gatsby's capacity for hard work and his dreaming are shown by the schedule that his father brings with him to Gatsby's funeral. This schedule shows a glimpse into the mind of the young Gatsby; as his father says, "...he was bound to get ahead." The schedule for planning his days and his general resolves show that Gatsby was different from the rest since his youth. He always had a plan for his life; he always wanted to improve himself, and make for himself a better way of life. It is this quality in Gatsby that made him idolise Daisy and reach for the perfect future with her. It was not so much Daisy's beauty or personality that made Gatsby love her; it was Gatsby's need for a dream, for something to work towards. To Gatsby, anything in life was possible; Nick describes Gatsby as having an 'extraordinary gift for hope' - however impossible it is that his dream will be achieved, Gatsby never gave up hope. It was these qualities in Gatsby that made such an impression on Nick. Nick alone out the rest of the characters recognised that Gatsby's gift for hope and his power to dream made him great, despite his flaws. ...read more.