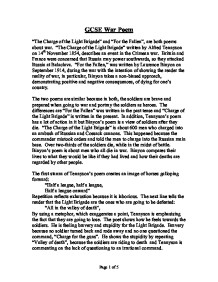 GCSE War Poem "The Charge of the Light Brigade" and "For the Fallen", are both poems about war. "The Charge of the Light Brigade" written by Alfred Tennyson on 14th November 1854, describes an event in the Crimean war. Britain and France were concerned that Russia may power southwards, so they attacked Russia at Balaclava. "For the Fallen," was written by Laurence Binyon on September 1914, during the war with the intention of showing the reader the reality of war, in particular, Binyon takes a non-biased approach, demonstrating positive and negative consequences, of dying for one's country. The two poems are similar because in both, the soldiers are brave and prepared when going to war and portray the soldiers as heroes. The differences are "For the Fallen" was written in the past tense and "Charge of the Light Brigade" is written in the present. In addition, Tennyson's poem has a lot of action in it but Binyon's poem is a view of soldiers after they die. "The Charge of the Light Brigade" is about 600 men who charged into an ambush of Russian and Cossack cannons. This happened because the commander mistook orders and told the men to charge into the Russian main base. ...read more.

"Stormed at with shot and shell, as horse and hero fell". This shows the soldiers great loss and weariness as they exit and do not attack. Tennyson's repetition o the attack again emphasizes the loss of men and their pride. "All that was left of them left of six hundred". The first line (before the comma) makes us think about how many soldiers have died; but the slow pace and repetition shows us the pride and honour of the soldiers. Stanza six is about the dead or alive soldiers who fought in the battle. The stanza questions their bravery, honour and pride and also how they will be remembered as patriots. The repetition of "Honour" in the last stanza, gives a strong effect resembling the sacrifice the Light Brigade had made. It demands honour from the reader. Rhyme is used to emphasize whatever is being said: "Forward the light brigade! Was there a man dismayed?" The rhetorical question and the rhyme strongly question the non-response of the soldiers. Tennyson uses irregular line lengths and a quick pace in stanza 4 to show how the Light Brigades have no control over the battle. "Cossack and Russian Reeled from the saber-stroke" As you can see enjambment is also being use here, which makes the line lengths more irregular. ...read more.

"As the stars are known to the night". This comparison is saying how long they will live, just like the stars in the sky. The last stanza shows how the soldiers will be alive when we are dead: "As the stars that will be bright when we are dust" The brightness of stars also represents the soldiers. "As the stars that are starry in the time of our darkness." This shows that the soldiers will shine when we are in trouble. Binyon uses caesura to emphasize the point he is trying to put through. "They shall not grow old, as we that are left grow old". This is emphasizing how we are going to get old and they are not. Binyon uses a slow pace because there is no action just feelings and opinions. The rhyme of this poem is slow, which resembles a funeral. Binyon uses free verse because it agrees with the way we feel for the soldiers. We feel honour, glory, depression and happiness in turn. I believe, that both the poems have a true view of war. They are just told in different ways and times. Tennyson looks at the soldiers from the way they fought but Binyon looks at the soldiers as people who gave the biggest sacrifice. Either way, they both look at the soldiers as heroes who will live forever. Page 1 of 5 ...read more.