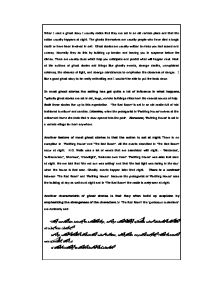 When I read a ghost story I usually notice that they are set in an old remote place and that the action usually happens at night. The ghosts themselves are usually people who have died a tragic death or have been involved in evil. Ghost stories are usually written to make you feel scared and uneasy. Normally they do this by building up tension and leaving you in suspense before the climax. There are usually clues which help you anticipate and predict what will happen next. Most of the authors of ghost stories add things like ghostly events, strange deaths, unexplained coldness, the absence of light, and strange coincidences to emphasize the closeness of danger. ...read more.

Likewise, when the protagonist in 'Farthing House' arrives at the retirement home she feels that 'a door opened into the past'. Moreover, 'Farthing House' is set in a remote village far from anywhere. Another feature of most ghost stories is that the action is set at night. There is no exception in 'Farthing House' and 'The Red Room'. All the events described in 'The Red Room' occur at night. H.G. Wells uses a lot of words that are associated with night: - 'blackness', 'subterranean', 'shadows', 'moonlight', 'darkness over head'. 'Farthing House' was also first seen at night. We are told that 'the red sun was setting' and that 'the last light was fading in the sky' when the house is first seen. ...read more.

Their existence was spectral; the cut of there clothing, fashions born in dead brains' and leave a sense of suspicion. One of the custodians had a withered arm, which makes you wonder what had happened to him. These characters are unlikable and reasonably unfriendly. By contrast, in 'Farthing House', the housekeeper is a friendly person -she welcomes the protagonist into the house and tries to make her feel comfortable. But she also behaves strangely: 'It's a lovely room' she said with hesitation' implying that she is worried about the room. This makes the reader predict that strange happenings are not far away. ...read more.