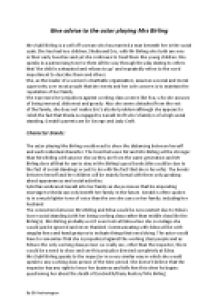 Give advice to the actor playing Mrs Birling

﻿Give advice to the actor playing Mrs Birling Mrs Sybil Birling is a well off woman who has married a man beneath her in the social scale. She has had two children, Sheila and Eric, with Mr Birling who both are now in their early twenties and yet she continues to treat them like young children. She speaks in a patronising tone to them all the way through the play stating to others that 'the child is exhausted and refuses to go' and repeatedly refers to the word impertinent to describe them and others. She, as the leader of a women's charitable organisation, assumes a social and moral superiority over most people that she meets and her sole concern is to maintain the reputation of her family. She expresses her prejudices against working class women like Eva, who she accuses of being immoral, dishonest and greedy. Also she seems detached from the rest of the family, she does not realise Eric's alcohol problem although she appears to relish the fact that Sheila is engaged to Gerald Croft who's family is of a high social standing, Gerald's parents are Sir George and Lady Croft. ...read more.

Mrs Birling probably won't even look at Edna when she is onstage-she would just be ignored and never thanked. Communicating with Edna will be with singular lines and hand gestures to indicate things that need doing. The actor would have to remember that she is prejudiced against the working class people and as Edna is the only working class person we really see, other than the inspector, there would be a need to show and see this prejudice directed completely at Edna. Mrs Sybil Birling speaks to the inspector in a very similar way in which she would speak to any working class person of the time period. She doesn't believe that the inspector has any right to know her business and tells him this when he begins questioning her about the death of Eva Smith/Daisy Renton/'Mrs Birling'. It is Sybil's injured pride through the 'impertinent' misuse of the Birling name by the now pregnant Eva, that provokes her vindictive decision to persuade, using her influence, the other members of her 'charitable' group to refuse Eva assistance. ...read more.

Her head movements would probably change from being quite slow and graceful, when talking to her husband or to Gerald, to violent when talking down to someone whom she finds 'impertinent', most probably Edna and the Inspector. When she talks about her meetings with Eva Smith/Daisy Renton she shows her agitation about being asked questions that she doesn't think are necessary to the situation at hand. She would also portray the resentment she feels towards that character from the said meetings. In Summary Sybil Birling is a terrible social snob who takes little interest in those she believes to be her inferiors and even though she holds a high position within her 'charitable group' she displays very little consideration for others from outside of her social equal. She would stand erect and proud and attempt to belittle anyone that she considers a threat to her standing. An actor taking on the role in a theatre production would be suited by being tall and well spoken with an excellent command of the English language as well as remembering that this woman has very few likeable character traits. By Elli Hetherington ...read more.