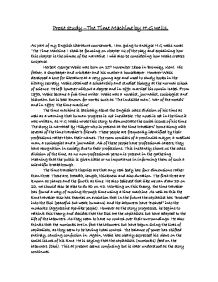 Going to analyse H.G wells novel 'The Time Machine. I shall be focusing on chapter 12 of the play and explaining how this chapter is the climax of the narrative

Prose study -The Time Machine by H.G wells. As part of my English literature coursework, I am going to analyse H.G wells novel 'The Time Machine. I shall be focusing on chapter 12 of the play and explaining how this chapter is the climax of the narrative. I will also be considering how Wells creates suspense. Herbert George Wells was born on 21st November 1866 in Bromley, Kent. His father, a shopkeeper and cricketer and his mother a housekeeper. However Wells developed a love for literature at a very young age and used to study books in the library secretly. Wells obtained a scholarship and studied biology at the normal school of science. He left however without a degree and in 1891 married his cousin Isabel. From 1893, Wells became a full time writer. Wells was a novelist, journalist, sociologist and historian but is best known for works such as 'The invisible man', 'war of the worlds' and in 1895, 'the time machine'. The time machine is basically about the English class division of his time as well as a warning that human progress is not inevitable. The novel is set in the time it was written, as H.G Wells wrote this story to demonstrate the social issues of his time. The story is narrated by Hillyer who is present at the time travellers' home along with several of the time traveller's friends. ...read more.

The time traveller first thought these were nocturnal animals but later finds out the truth. With his first encounter with a morlocks, the time traveller describes it as "a queer little ape-like figure, its head held down in a peculiar manner." He further describes the morlocks, "...dull white, and had strange large greyish eyes". The morlocks also had flaxen hair on their head and their backs which is why the time traveller later says "it was so like a human spider!" they also appeared to hold their forearms very low which made them look as if they were walking on all fours. With this brief encounter with the morlocks, the time traveller instantly begins to think up of a theory as to what these species were. At first, he thought they were some kind of nocturnal animals, as they possessed all the characteristics of one (used to the dark, large eyes). Except later he accepts that the morlocks like the Eloi, are human. After this does the truth dawn onto him that future human had divided into two species and that the morlocks were the people of the year 802,701 that lived underground. The upper class of Well's time had if any, very limited respect for the labourers class. And due to this class division, the time traveller presumes that the morlocks are the direct descendants of the labourers of the 19th century. ...read more.

He is trying to say that the capitalists of his time are like the morlocks. The capitalists are perhaps like scavengers, hungry for the flesh of labourers. He is also presenting his opinion on the unequal division of the classes. Like the morlocks and the Eloi, the capitalists and the labourers are two different species. The Eloi can once be compared to the 19th century capitalists, that they too enjoy the riches of the upper world. But in fact the situation is quite the opposite. The morlocks only let the Eloi live so that they can later eat them. Similarly, in Wells opinion, the capitalists only let the labourers live so that they can get work out of them. Wells message is simple; this extreme class division should end. An audience of the 21st century would react differently to the audience of the 19th century regarding the story. This is because now, the industrial revolution has almost entirely disappeared, resulting in hardly any labourers. Even so, these few labourers are treated with dignity and with respect, unlike in the time of H.G Wells. Another reason would be that the class divisions of the modern day are not so extreme as they were before. This novel is once again extremely well written and the moral is easily understood. However, in my opinion, this novel is aimed at an older audience rather than a teenage one. This is due to the language and grammar used in the book. ...read more.