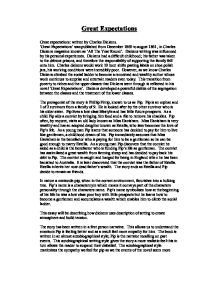 Great Expectations Great expectations: written by Charles Dickens. 'Great Expectations' was published from December 1860 to august 1861, in Charles Dickens magazine known as 'All The Year Round'. Dickens writing was influenced by his personal experiences. Dickens had a difficult childhood; his father was taken to the debtors prisons, and therefore the responsibility of supporting the family fell onto him. Charles dickens would work 10 hour shifts pasting labels on shoe polish jars, his working conditions were incredibly poor. However, as we know Charles Dickens climbed the social ladder to become a renowned and wealthy author whose work continues to surprise and entertain readers even today. This transition from poverty to riches and the upper classes that Dickens went through is reflected in his novel 'Great Expectations'. Dickens developed a powerful dislike of the segregation between the classes and the treatment of the lower classes. The protagonist of the story is Phillip Pirrip, known to us as Pip. Pip is an orphan and 1 of 2 survivors from a family of 9. He is looked after by the other survivor who is his older sister. Pip lives a low class lifestyle and has little future prospects. As a child Pip aids a convict by bringing him food and a file to remove his shackles. ...read more.

These middle class readers would read about little vulnerable Pip being attacked by the wind and it would cause them to feel sympathy towards him Dickens creates tension by using phrases such as 'overgrown with nettles" this gives the graveyard an unmaintained, derelict and mysterious aura. As I have previously stated Dickens has used description to emphasize Pips vulnerability this adds the feeling of tension as this vulnerable child is all alone in a derelict graveyard. This unmaintained graveyard could symbolise the situation Pip was in as a child; nearly all his family has died and he is living a poor, low class and unmaintained lifestyle. When Magwitch arrives the reader has already built up an image of violence and aggression because of the description Dickens uses. Dickens has used descriptions such as 'the distant savage lair' and 'overgrown with nettles'. The weather is described in an animalistic, vicious way and nettles can also cause pain. Even before Magwitch has arrived dickens has created an atmosphere of violence. Dickens describes Magwitch in a way which makes him out to be a vicious, cruel and ruthless. Magwitch is described in such a negative way so that when he is seen in a different way in the later chapters it will add to the surprise of the reader. ...read more.

Magwitch is described in chapter 39 as an older more tired man who cares enough about Pip to make a life risking journey to see him. Throughout the novel Magwitch would be remembered as a cruel vicious and low class convict however after so many chapters he returns and the reader is informed that it was Magwitch who had been paying for Pip to live his life. Dickens was trying to convey, to his generally middle class audience, the message that people should not be stereotypical about people. This is shown in the way that Magwitch who has been seen as a villain had turned out to be a caring, generous man. Pips initial response is one of shock and he recalls of the physical shock he was in after finding out: "I grasped at the chair, the room began to surge and turn". Pip is shocked because he has built his entire life around the theory that Miss Havisham was his benefactor who was preparing him for marriage to Estella. Pip is in love with Estella and the news that he wasn't brought up to marry her hurts him. Pip also remembers how he has seen Magwitch "down in the ditch tearing and fighting like a wild beast" and decides to lock the door of Magwhitch's room on his way out. ...read more.