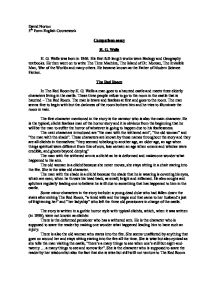 David Norton 5th Form English Coursework Comparison essay H. G. Wells H. G. Wells was born in 1866. His first full-length works were Biology and Geography textbooks. He then went on to write The Time Machine, The Island of Dr. Moreau, The Invisible Man, War of the Worlds and many others. He became known as the Father of Modern Science Fiction. The Red Room In The Red Room by H. G. Wells a man goes to a haunted castle and meets three elderly characters living in the castle. These three people refuse to go to the room in the castle that is haunted - The Red Room. The man is brave and fearless at first and goes to the room. The man seems fine to begin with but the darkness of the room bothers him and he tries to illuminate the room in vain. The first character mentioned in the story is the narrator who is also the main character. He is the typical, clich� fearless man of the horror story and it is obvious from the beginning that he will be the man to suffer the horror of whatever is going to happen due to his fearlessness. The next characters introduced are "the man with the withered arm", "the old woman" and "the man with the shade". These characters are known by these names throughout the story and they are all clich�s in themselves: "they seemed to belong to another age, an older age, an age when things spiritual were different from this ...read more.

The language used and the sentence structure is very long-winded along with the use of sub-clauses and lots of punctuation: "I must confess that the oddness of these three old pensioners in whose charge her ladyship had left the castle, and the deep-toned, old fashioned furniture of the housekeeper's room in which they foregathered, affected me in spite of my efforts to keep myself at a matter-of-fact phase". Also, the language used is somewhat archaic with phrases such as "I fancied I heard" and "I resolved to make a systematic examination of the place at once, and dispel the fanciful suggestions of its obscurity before they obtained a hold upon me" Onomatopoeia is used a little with words such as "rustling" and "crackling" to help describe the situation. Metaphors are used regularly and liberally: "my candle was a little tongue of light in its vastness, that failed to pierce the opposite end of the room, and left an ocean of mystery and suggestion beyond its island of light", "the flames were still dancing between the glowing coals, and splashing red reflections upon the furniture". The ending of the story is a slight twist. One expects a more conventional ghost but what is found in the room is fear itself. However, it is suspected from the very start that there is going to be something in the room. Just from the first sentence there is an immediate cause for concern. ...read more.

I think the story is easy to read as it is written simply in everyday language, however, there are certain clues that must be figured out to fully understand the twist of the story. The ending is unexpected and becomes clearer as the story unfolds. There are several likenesses and differences between the stories. For example, both stories deal in mystery and the unexpected, they both draw the reader in slowly as the plot progresses. There are hints in both stories as to what is going to happen and it is obvious that something is going to happen to the main character. The protagonists in both stories have no real worry or fear about what is going to happen, they don't quite seem na�ve but a little unaware of their fate. The styles of the stories are very different. The Red Room is very old fashioned and full of clich�s whereas The Landlady is not. The Red Room is somewhat of an anticlimax; the ending is not expected but it is not satisfying. On the other hand, The Landlady is also not expected but it slowly dawns on the reader as the true nature of the landlady's intentions becomes apparent. The Red Room is written in the first person to give a sense of participation, whereas The Landlady is written in the third person, telling the story of another person's doom. The Landlady is much simpler than The Red Room which is very long winded and old-fashioned in its style. The Landlady misleads to a certain extent whereas in The Red Room it is obvious there is some horror to come. ...read more.