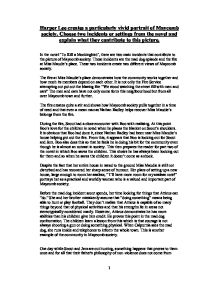 Harper Lee creates a particularly vivid portrait of Maycomb society. Choose two incidents or settings from the novel and explain what they contribute to this picture.

Harper Lee creates a particularly vivid portrait of Maycomb society. Choose two incidents or settings from the novel and explain what they contribute to this picture. In the novel 'To Kill a Mockingbird', there are two main incidents that contribute to the picture of Maycomb society. These incidents are the mad dog episode and the fire at Miss Maudie's place. These two incidents create two different views of Maycomb society. The fire at Miss Maudie's place demonstrates how the community works together and how much its members depend on each other. It is not only the Fire Service attempting out put out the blazing fire "We stood watching the street fill with men and cars" The men and cars have not only come form this neighbourhood but from all over Maycomb town and further. ...read more.

Despite the fact that her entire house in razed to the ground Miss Maudie is still not disturbed and has recovered her sharp sense of humour. Her plans of setting up a new house, large enough to room her azaleas, " I'll have more room for my azaleas now!" portrays her as a practical and worldly woman who is a valued and important part of Maycomb society. Before the mad dog incident scout spends, her time looking for things that Atticus can "do." She and her brother mistakenly assume that "doing something" means being able to hunt or play football. They don't realize that Atticus is capable of so many things beyond that of physical activities and that his strengths lie in areas not stereotypically considered manly. However, Atticus demonstrates he has more abilities than his children give him credit. He proves this point in the mad dog confrontation. ...read more.

Nevertheless, when the moment comes to shoot the dog, the sheriff hands his rifle over to Atticus, with the comment that Atticus is the only marksman who could be sure to put the animal out of its misery safely with a single shot. This is the first hint the children have ever had that their father was once known as "One-Shot Finch," the best hunter in Maycomb County. Miss Maudie later tells Jem and Scout that Atticus gave up hunting long ago because he felt that his natural talent for shooting gave him an "unfair advantage over most living things." Jem is delighted. "Atticus is a gentleman, just like me!" Jem shouts, meaning that they are both right to avoid fighting and violence. This explanation of Atticus exposes most of Maycomb to be doing wrong with their socially accepted ways. This shows contrast between the fire and this scene as it illustrates that not all aspects of Maycomb society that are good. 1 ...read more.