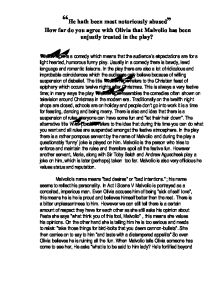 &quot;He hath been most notoriously abused&quot; How far do you agree with Olivia that Malvolio has been unjustly treated in the play?

"He hath been most notoriously abused" How far do you agree with Olivia that Malvolio has been unjustly treated in the play? Twelfth night is a comedy which means that the audience's expectations are for a light hearted, humorous funny play. Usually in a comedy there is bawdy, lewd language and romantic liaisons. In the play there are also a lot of ridiculous and improbable coincidences which the audience only believe because of willing suspension of disbelief. The title Twelfth Night refers to the Christian feast of epiphany which occurs twelve nights after Christmas. This is always a very festive time; in many ways the play Twelfth Night resembles the comedies often shown on television around Christmas in the modern era. Traditionally on the twelfth night shops are closed, schools are on holiday and people don't go into work it is a time for feasting, dancing and being merry. There is also and idea that there is a suspension of rules everyone can have some fun and "let their hair down". The alternative title What You Will refers to the idea that during this time you can do what you want and all rules are suspended amongst the festive atmosphere. ...read more.

We first meet Malvolio in Act one scene 5,he immediately attracts our attention because of how out of place he seems. In a comic play filled with ridiculous characters, Malvolio is serious and sour, with distaste for amusement and laughter of any kind, as we see in his reaction to Feste. As the play goes on, the conflict between his temperament and that of the other characters-especially Sir Toby and Sir Andrew-comes out into the open, with extreme consequences. It is this sour, fun-despising side that earns him the enmity of the zany, drunken Sir Toby and the clever Maria, who together engineer his downfall. It begins to infuriate them to the extent they show "schadenfreude" towards Malvolio, they use sadistic and violent images describing what they would like to do to him. Sir Andrew says he would like to "pistol him" while Sir Toby expresses how he would enjoy "a stone bow to him in the eye!". For them Malvolio is the embodiment of order and sobriety. However as they are so drunk and disorderly we do not really take what they say seriously, we also perhaps sympathise with Malvolio as he is head servant and it is therefore his duty to keep everyone at bay. ...read more.

It is as if the unfortunate servant must be sacrificed so that the rest of the characters can indulge in the hearty spirit that classifies Twelfth Night. As he is sacrificed, Malvolio begins to earn our respect. He has a second change of character here he seems sorry and even praises Feste now that he needs his help! He says to Feste "I will live to be thankful to thee for't". However the minute he is out he goes back to his old ways. Malvolio must be content with this self-knowledge, because the play allows Malvolio no real compensation for his sufferings. At the close of the play, he is brought out of the darkness into a celebration in which he has no part, and where no one seems willing to offer him a real apology. "I'll be revenged on the whole pack of you," he snarls, stalking out of the festivities .His exit strikes a jarring note in an otherwise joyful comedy. Malvolio has no real place in the anarchic world of Twelfth Night, except to suggest that, even in the best of worlds, someone must suffer while everyone else is happy. I agree with Olivia that Malvolio has been "most notoriously abused". He was locked up like a criminal and worse still made to think he was going crazy. He was simply doing his job, although he may have needed to 'loosen up a little'. ...read more.