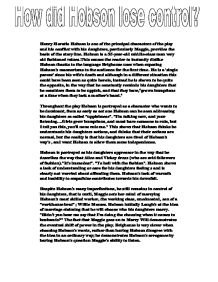 Henry Horatio Hobson is one of the principal characters of the play and his conflict with his daughters, particularly Maggie, provides the basis of the story line. Hobson is a 55-year-old middle-class man very old fashioned values.This causes the reader to instantly dislike Hobson thanks to the language Brighouse uses when exposing Hobson's mannerisms to the audience for the first time. He is a 'single parent' since his wife's death and although in a different situation this could have been seen as quite heroic, instead he is shown to be quite the opposite, in the way that he constantly reminds his daughters that he considers them to be uppish, and that they have,"grown bumptious at a time when they lack a mother's hand." ...read more.

Hobson is portrayed as his daughters oppressor in the way that he describes the way that Alice and Vickey dress (who are avid followers of fashion)."It's immodest". "To hell with the fashion". Hobson shows a lack of understanding or care for his daughters feelings and is clearly not worried about offending them. Hobson's lack of warmth and inability to empathize contributes towards his downfall. Despite Hobson's many imperfections, he still remains in control of his daughters, that is until, Maggie sets her mind of marrying Hobson's most skilled worker, the working class, uneducated, son of a "workhouse brat" ; Willie Mosses. Hobson initially Laugh's at the idea of marriage claiming that he will choose who his daughters marry. ...read more.

In the middle of act three Hobson can be found warning his daughters never to come home." Don't you imagine thereby be room for you when you come home crying and tired of your fine husbands. I'm Rid of ye and it's a lasting riddance." In conclusion, the main cause for Hobson's loss of control was That Hobson underestimated his Daughters, Particularly Maggie. Throughout the play Brighouse uses Hobson a representation of a middle class and proud stereotype. Hobson's loss o control is underlined at the end of the play when he is forced to give will half of his shop and agrees to have no say in the shop's affairs. Brighouse uses irony in the form of the "Son of a workhouse brat" Will mossop. ...read more.