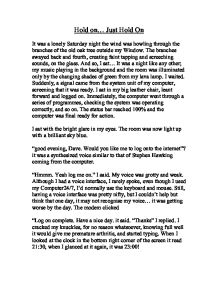 Hold on… Just Hold On

It was a lonely Saturday night the wind was howling through the branches of the old oak tree outside my Window. The branches swayed back and fourth, creating faint tapping and screeching sounds, on the glass. And so, I sat… It was a night like any other; my music playing in the background and the room was illuminated only by the changing shades of green from my lava lamp. I waited. Suddenly, a signal came from the system unit of my computer, screening that it was ready. I sat in my big leather chair, leant forward and logged on. Immediately, the computer went through a series of programmes, checking the system was operating correctly, and so on. The status bar reached 100% and the computer was final ready for action.

I sat with the bright glare in my eyes. The room was now light up with a brilliant sky blue.

“good evening, Dave. Would you like me to log onto the internet”? it was a synthesized voice similar to that of Stephen Hawking coming from the computer.

“Hmmm. Yeah log me on.” I said. My voice was grotty and weak. Although I had a voice interface, I rarely spoke, even though I used my Computer24/7, I’d normally use the keyboard and mouse. Still, having a voice interface was pretty nifty, but I couldn’t help but think that one day, it may not recognise my voice… it was getting worse by the day. The modem clicked

“Log on complete. Have a nice day. it said. “Thanks” I replied. I cracked my knuckles, for no reason whatsoever, knowing full well it would give me premature arthritis, and started typing. When I looked at the clock in the bottom right corner of the screen it read 21:30, when I glanced at it again, it was 23:00!

What the hell have I been doing for the past our and a half?! I shouted. I looked at my internet browser window, and found some page about Government conspiracies’. ”Uh huh..so,em why did I come here” I asked myself in a patronising voice. Although I had no recollection of the last hour and a half at all, I decided to go with the provably flow. I scrolled up and down the page for a bit until I saw something that grabbed my attention

It looked mighty interesting. The heading read “Ion Cannon tests on the moon” Having an insatiable curiosity for weapons of mass destruction ever since my girl friend died (the probable cause of the hate inside me) I had a look. I decided to make a call in the pentagons web site.  And I must admit, even I was surprised to find they had one. I phoned around my friends and told them to log onto the internet and activate my IP scatter programme I had given them all then link to my computer. I then stocked up on food and drinks, just to nibble on. I activated my server scatter and got ready for business, and cracking my knuckles of course.

The server scatter programme made a continuous loop between friends and my own computer, making tracing impossible, or at least, virtually impossible. I played 2Mission Impossible 2 “ theme tune, as it was a fitting music track to listen to given the situation. I entered the pentagons URL into my browser, and stuffed my face with some more food. The first page was, I expected, boring as hell.

“Damn visitors page slowing, me down again” I said to myself. I sent an E-Mail to the administrator who was most likely to be a computer, with a modified “Trojan” virus. Luckily, the E –Mail was accessed immediately, meaning I could access the primary server immediately. A strange looking page came up, not like anything I had seen before. I realised it was the HTML code for the main server with hyperlinks imbedded in it. It took me some time, but I finally found the link to the page I wanted by which time the Mission impossible theme tune had finished... I clicked on it and the information filed the screen.

There was limitless information in there, and what could I do, but copy it all? I cackled like an evil witch as I copied the text into a file for myself. Then, a small red box appeared in the centre of my screen that said “tracing” in it with a status bar. As it reached 80%, I sat backed. I could imagine the stupid idiots at the pentagon sitting and getting excited, in the false knowledge that they would soon be able to get me. It had taken 30 minutes for the bar to get to 97% when it froze, and restarted. I savoured the moment, laughing at the fools in America. It then reset the transmitted IP address of my computer to somewhere in Belgium, then France, then Germany, then China. The pentagon had no chance of catching me. As far as they were concerned I was moving all over the world in a half an hour every time they tried to trace me. I finished getting the information I wanted and logged off.

I published each section of my file to a different newspaper, worldwide. Each one had a different story to sell, new and old stories that were very entertaining. Not only that, but from the proceeds, I had gained a very large bank balance. And people say money doesn’t bring happiness? The US government denied everything of course, but I knew it was true, or did I