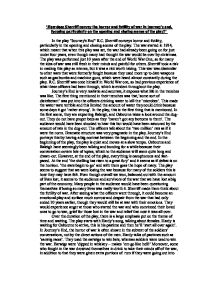 Horror And Futility In Journeys End

'How does Sherriff convey the horror and futility of war in journey's end, focusing particularly on the opening and closing scenes of the play?' In the play "Journey's End" R.C. Sherriff conveys horror and futility, particularly in the opening and closing scenes of the play. The war started in 1914, which meant that when this play was set, the war had already been going on for just under four years, even though many had thought the war would be over by christmas. The play was performed just 10 years after the end of World War One, so for many the idea of war was still fresh in their minds and painful for others. Sherriff took a risk in making this play so intense, but it was a risk worth taking. This war was dissimilar to other wars that were formerly fought because they used more up to date weapons such as gas bombs and machine guns, which were heard almost constantly during the play. R.C. Sherriff was once himself in World War one, so had previous experience of what these officers had been through, which is evident throughout the play. Journey's End is very realistic and acurrate, it exposes what life in the trenches was like. The first thing mentioned in their trenches was that,'some sort of disinfectant' was put into the officers drinking water to kill the 'microbes'. This made the water taste terrible and this limited the amount of water they could drink because some days it got 'rather strong'. ...read more.

The audience were waiting for the next event to happen. The entire play was set in one place and from the play you can see that a lot of the soldiers/officers time was spent in the dugout. This meant for most of their time in the trenches they had very little to occupy themselves with and found themselves waiting again. The newest officer is Raleigh, who 'looks a good chap'. When Raleigh enters the play in Act 1, Scene 1, he seems bewildered and uncertain of what he has got himself into. He 'only left school last summer' and when he enters the scene, he has very little experience as he 'only landed a week ago'. Raleigh's journey is, and has been, strongly influenced by Stanhope, and his presence in Raleigh's life. Stanhope knew Raleigh before the war, as their fathers were friends. When he first arrives in the trenches, at the beginning of the play, he is very enthusiastic about being in the war. He was 'keen to get out here' (British Trenches). He is also very ebullient about being in Stanhope's company, but this soon changes because of Stanhope's reactions to his presence. Raleigh soon realises that there is nothing noble about war. Raleigh discovers this by joining the army straight after finishing school and sees his hero torn apart, lost and drinking. He seems to fit in straight away and bonds with Osbourne before meeting any of the other officers. After the raid Raleigh realises why Stanhope had acted the way that he did.To Stanhope, Osbourne was 'the one man I could trust' ...read more.

Mason brings normality to the scene when he enters. His 'tea, sir?' seems to break the silence and distracts everyone's minds for a few minutes. However, Mason's normality makes him look out of place to the audience. Even though his is the regular person and the officers are the one's affected by the horror of war, Sherriff makes Mason seem abnormal. Mason has an accent, which is reflected on his position. He has to ask 'Excuse me, sir. Can I lay supper?' He addresses everyone correctly with 'sir'. He has to answer to the officers, as he is a servant to them. In conclusion, I think in the play the reality of war is very successfully conveyed. The characters are believable and the way they deal with their stress and anxieties is true to the way we would in the same situation. R.C. Sherriff gives a good account of life in the war, as he fought in the war himself. R.C. Sherriff presents many different ways in which men reacted to the pressures of the First World War. He uses Hibbert to show the way some of the soldiers reacted, and then presents the opposite view of Stanhope who, despite being typical perfect solider, still has is moments of fear and self-doubt. He uses Osborne to represent bravery, courage and heroism. The play was written to make people contemplate the futility of war. World war one was a war, which lead hundreds of thousands of soldiers to their death. A road where millions met their death, World War One truly was a 'Journey's End'. ...read more.