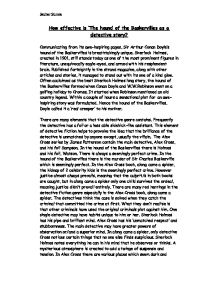 hound of the baskervilles

How effective is 'The hound of the Baskervilles as a detective story? Communicating from its awe-inspiring pages, Sir Arthur Conan Doyle's hound of the Baskervilles is breathtakingly unique. Sherlock Holmes, created in 1901, still stands today as one of the most prominent figures in literature, unequivocally eagle-eyed, and armed with his resplendent brain. Published fortnightly in the strand magazine, along with other articles and stories, it managed to stand out with its one of a kind glow. Often acclaimed as the best Sherlock Holmes long story, the hound of the Baskervilles formed when Conan Doyle and W.W.Robinson went on a golfing holiday to Cromes. It started when Robinson mentioned an old country legend. Within a couple of hours a sensational plot for an awe-inspiring story was formulated. Hence the hound of the Baskervilles. Doyle called it a 'real creeper' to his mother. There are many elements that the detective genre contains. Frequently the detective has a foil or a less able sidekick-like assistant. This element of detective fiction helps to provoke the idea that the brilliance of the detective is unmatched by anyone except, usually the villain. The Alex Cross series by James Patterson contain the main detective, Alex Cross, and his foil Sampson. ...read more.

'..For when I see the stub of a cigarette marked Bradley, Oxford Street, I know that my friend Watson is in the neighbourhood.' Conan Doyle's language usage creates, in some minds, a sense of a near heroic figure in Holmes this is shown in the line, 'never have I seen a man run as Holmes that night.' This line shows Holmes standing out, being the only one with 'blink-of-an-eye' reactions. The concept of red herring's is to create a lead or breakthrough in a case for the detective. These have been cleverly devised into the hound of the Baskervilles as there is one clearly visible in London at the beginning. This is the suspecting of Barrymore, Sir Charles butler. The true criminal poses as Barrymore while in London leading Holmes and company to believe that Barrymore is the criminal. Barrymore is later proved to be not guilty. The effects red herrings have on the audience are devastating because it leaves the reader thinking the criminal is going to be harder to catch than the detectives think. We expect to read about a seemingly perfect crime in detective fiction because otherwise it wouldn't be as tension-building or suspense-filling. ...read more.

she shot her arms out from her sleeves, and we saw with horror that they were all mottled with bruises.' This is evidence that Stapleton beat his wife. Most detective fiction is expected to be formed around the idea of 'who dunnit?' This is true in along came a spider as Alex Cross tries to find a villain after another villain. However in hound of the Baskervilles it isn't the case as Holmes and Watson are also saving Sir Henry from an untimely death. You would expect the idea of 'who dunnit?' to be the centre theme around the story, creating tension and suspense fitting for it. This makes Holmes seem heroic, '...Holmes had emptied five barrels of his revolver into the creature's flank.' I think the hound of the Baskervilles is very sensational novels within the detective genre because it is where Holmes and Watson meet a foe worthy of there steel. I think the mysterious atmosphere is particularly effective because it creates the tension and suspense it needs to create and it holds secrets, leaving the question in your mind,' What's it hiding?' also I think the mysterious atmosphere is effective because of its unique base for the whole of the story. 'No literary figure has a stronger hold on the public imagination than Sherlock Holmes.' This is shown in the essay. Jauhar Sumra ...read more.