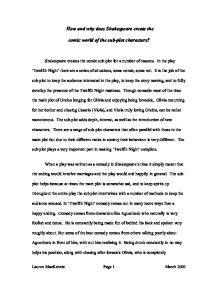 How and why does Shakespeare create the comic world of the sub-plot characters?

How and why does Shakespeare create the comic world of the sub-plot characters? Shakespeare creates the comic sub-plot for a number of reasons. In the play 'Twelfth Night' there are a series of situations, some comic, some not. It is the job of the sub-plot to keep the audience interested in the play, to keep the story moving, and to fully develop the presence of the Twelfth Night madness. Though comedic most of the time the main plot of Orsino longing for Olivia and enjoying being lovesick, Olivia mourning for her bother and chasing Cesario (Viola), and Viola truly loving Orsino, can be rather monotonous. The sub-plot adds depth, interest, as well as the introduction of new characters. There are a range of sub-plot characters that often parallel with those in the main plot but due to their different ranks in society their behaviour is very different. The sub-plot plays a very important part in making 'Twelfth Night' complete. When a play was written as a comedy in Shakespeare's time it simply meant that the ending would involve marriages and the play would end happily in general. The sub-plot helps because at times the main plot is somewhat sad, and to keep spirits up throughout the entire play the sub plot intertwines with a number of methods to keep the audience amused. ...read more.

The only reason he would ever get married is to better himself in society, and with that thought he is constantly trying to court Olivia, an unlikely and unattainable woman. His self-delusions coupled with the audience's knowledge of the plan against him make the situation even funnier. Malvolio is, during the period of Twelfth Night (the last day before the holiday celebrations cease), the only one of the characters acting normally. Normal for him though is very strict and serious. He needs to persistently be in total control. In a time when Illyria is full of festivities and the sub plot characters are in high spirits, he relentlessly attempts to make everyone come to their senses and be as they normally would. For this purpose Maria, Sir Aguecheek, and Sir Toby devise a plan to make a fool out of Malvolio and get revenge of previous issues of his pretentiousness. They do this by writing a letter in Olivia's handwriting, telling Malvolio that she is desperately in love with him, and to show his love back asks of him to smile and wear yellow cross-gartered stockings. "Remember who commended thy yellow stockings, and wish'd to see thee ever cross-garter'd." II v For a puritan, one who is very straight and strict, wearing yellow stockings is almost unfathomable. Maria writes the letter with every intention of making Malvolio the fool, she knows Olivia despises the color yellow, and she knows smiling or being generally cheerful in any way is difficult for Malvolio. ...read more.

An important factor to the play in general is the audience. In the audience there are a vast of different social classes. Shakespeare knew this, and he knew to he had to please all of them. Having the sub-plot introduces many more characters that people in the audience can relate to. Not only does Shakespeare play up to the higher class section of the audience with characters like Olivia and Orsino, but to the middle and lower classes with characters such as Fabian and Maria. Shakespeare includes a range of social classes and does this by means of the sub-plot. The sub-plot, like the main comes together at the end with marriage, the usual ending to a Shakespearean comedy. Two of the conspirators, Sir Toby Belch and Maria get married, which seems logical, they are suit for each other class wise. The importance of the sub-plot in the play is immeasurable. It makes the play a comedy in every sense of the word. When the main plot is lacking in laughs the sub-plot always comes in to keep the audience absorbed in the play. The sub-plot creates a world that the audience can The characters that move between the two plots make the play more interesting because it intertwines and brings the play together as a whole. The play would have been lost with out it. Lauren MacKenzie Page 1 March 2001 ...read more.