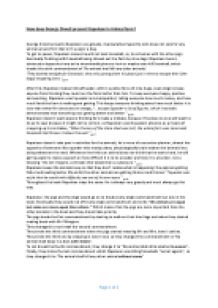 How did George Orwell present Napoleon in Animal Farm

Transfer-Encoding: chunked ﻿How does George Orwell present Napoleon in Animal farm? George Orwell presents Napoleon as a greedy, manipulative hypocrite who does not care for any animal around him that isn?t a pig or a dog. To get to power, Napoleon knows he will not beat snowball, so, he schemes with the other pigs. Eventually finishing with Snowball being chased out the farm by nine dogs. Napoleon here is obviously a hypocrite here as he intentionally plans to hurt or maybe even kill Snowball, which breaks the sixth commandment of ?No animal shall kill any other animals.? ?They dashed straight for Snowball, who only sprang from his place just in time to escape their [the dogs] snapping jaws.?pg 39 After this, Napoleon makes himself leader, with it a police force of nine huge, scary dogs to keep anyone from thinking they could run the farm better than him. ...read more.

Whenever he thinks an animal does not think that he works hard, he will get Squealer to make a speech on how difficult it is to be a leader and how it is a burden, not a blessing. ?Do not imagine, comrades that leadership is a pleasure.? pg 40 Napoleon keeps the animals busy so that they don?t realise what is happening: the pigs are getting fatter and leading better life whilst the other animals are getting thinner and thinner: ?Squealer was so fat that he could with difficulty see out of his own eyes.? pg 92 Throughout the book Napoleon stays the same: He is always very greedy and must always get his way. Napoleon, the pigs and the dogs would go on to break every single commandment but one in the book. ...read more.

Finally, they broke the last commandment whilst Napoleon was killing Snowballs ?secret agents?, so they changed it to ?No animal shall kill any other animal without cause? The battle of the Cowshed, one of the ever-changing stories in the book; in one-chapter Snowball is a hero, the next he is a villain, leading the humans into battle with a cry of ?LONG LIVE HUMANITY!? It is used as a way to ensure Napoleon?s status as a hero and a leader among the animals, who will grow up wanting to be like him. In conclusion, George Orwell presents Napoleon as a representation of Joseph Stalin, who like Napoleon, lead a revolution that turned into a dictatorship. George Orwell did this because he wanted to tell everyone how bad things were in Russia for the normal, working class people (the animals) and how they (pigs) became just like the people they came together to overthrow in the first place. By Gil Page of ...read more.