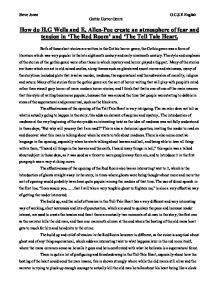 How do H.G Wells and E. Allen-Poe create an atmosphere of fear and tension in 'The Red Room' and 'The Tell Tale Heart.

How do H.G Wells and E. Allen-Poe create an atmosphere of fear and tension in 'The Red Room' and 'The Tell Tale Heart. Both of these short stories are written in the Gothic horror genre, the Gothic genre was a form of literature which was very popular in the late eighteenth century and early nineteenth century. The style and emphasis of the stories of the gothic genre were often those in which mystery and horror played a big part. Many of the stories are those which are set in old ruined castles, along themes such as ghosts and secret rooms and staircases, many of the storylines included plots that involve murder, madness, the supernatural and the subversion of morality, religion and nature. Many of the stories from the gothic genre are the sort of horror writing that will play with people's mind rather than visual/ gory horror of more modern horror stories, and I think that that is one of one of the main reasons that this style of writing became so popular, because this was around the time that people were starting to dabble in areas of the supernatural and paranormal, such as the black arts. The effectiveness of the opening of the Tell-Tale Heart is very intriguing. The narrator does not tell us what is actually going to happen in the story, this adds an element of surprise and mystery.. The introduction of madness at the very beginning of the story adds an interesting twist as the idea of madness was not fully understood in those days, "But why will you say that I am mad?" ...read more.

The use of a castle also adds to the effect of the setting by the things that can be found in a castle, such as large garish sconces hanging from the wall, which can be mistaken for many things, long dark passageways which add a theme of unending and unrelenting about the castle and furthermore there would be many dark twisted staircases, which would again add to the whole mysterious ambience of the castle. The next things to add to the setting in the Red Room is the old people which were found just sitting all in one room as if time and society had forgotten them, these people have been added to create a feeling of decaying and rotting within the castle, especially the man with the withered arm, because like madness, deformities were not really understood or accepted in society, rather like the castle and the red room itself. The style that the Tell Tale Heart is written in is very distinctive. It starts with very short sentences, making the pace of the story very quick, "I heard all things in the heaven and the earth. I heard many things in hell. How then am I mad?", you can tell the lack of emotion in the mans voice, especially seeing that he has just killed a man, it is almost as if he is amoral, he doesn't even know that he has done anything wrong. He seems to be very confident in himself, very proud about what he has done. ...read more.

And anaphora is used in "anything.........anything," this again builds up the tension and the theme of madness. The language imagery in the Red Room again plays a big part in the expansion of the story, the use of the colour red adds an immediate feel of devilry and evil, as these things were often connected. The long description of the mans journey through the old castle adds to the tension, by prolonging the feeling of fear. The use of sayings such as "long, chilly, echoing passageway," adds a sensuous description, making the reader feel like they are actually there. The use of sibilance, "The moonlight picked out everything in vivid black shadow or silvery illumination," this tells us that the moonlight is helping him see, but is also scaring him, which makes it seem even scarier and creepier. Personification is used of the shadows, "Shadows, cower and quiver," making them seem a whole lot more real to the reader, and again the same thing is used for a bronze group, "A bronze group...gave me the impression of someone crouching to waylay me," this has the same effect as last time. A metaphor is used in, "the pallid silence of the landing," and synesthesia is used to make the moon seem unnatural. The authors of the Tell-Tale Heart and the Red Room have both used a wide range of effective techniques to create an atmosphere of fear and tension, they have used many similar techniques, all associated with the gothic genre, and they were all very effective in the way they used them. Steve Jones G.C.S.E English Gothic Horror Genre ...read more.