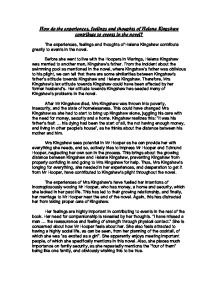 How do the experiences, feelings and thoughts of Helena Kingshaw contribute to events in the novel?

Kingshaw is mistreated by her in an attempt to make her look as though she is treating him and Hooper equally. Her disguised attempt to let Hooper make friends with Kingshaw's last hope, Fielding, though opposed by Kingshaw, was carried out, with no regard for Kingshaw at all. Mrs Kingshaw's indifference or lack of feeling, for Kingshaw seems to make him feel as though there is no one there for him. He feels isolated and alone, and this leads to his lone battle of wills against Hooper and ultimately, to his suicide. Kingshaw learns to hate Mrs Kingshaw, his own mother and these feelings of hate change his nature, hardening him and frightening him at the same time. The time that Kingshaw is forced to spend with Hooper gives rise to deepening hatred between them, and intensifies the psychological warfare between them, which is apparent by the greater degrees of torment Hooper inflicts on Kingshaw. Mrs Kingshaw's apathy when it comes to Kingshaw's torture is taken advantage of by Hooper, who is able to get away scot-free. Mrs Kingshaw causes much jealousy of Kingshaw in Hooper, again, creating more hate in Kingshaw for the both of them. ...read more.

Again, this adds to Kingshaw's and her distance. Mrs Kingshaw also believes that motherhood consists of "saying the right things and looking sufficiently at ease" in Kingshaw's presence. Because of this thought, everything she does is merely for show, making it very superficial, and she thus only 'mothers' and 'loves' Kingshaw when they are in front of Hooper, when her actions are taken note of, or when it is in the house. This dishonesty and hypocrisy disgusts Kingshaw, and at the same time, attracts Mr Hooper, and is possibly another reason for their marriage. Mrs Kingshaw's thinking that Kingshaw and Hooper can be friends drives her to make them spend time together, giving Kingshaw the impression of no escape and disheartening him, and at the same time, giving Hooper the opportunity to torment Kingshaw. As in the incidents where Kingshaw was locked in the Red Room and in the shed, Mrs Kingshaw's assumption that they were just playing together allows Hooper to remain "innocent" and allows Hooper to torment Kingshaw another time, again and again until Kingshaw finally commits suicide. As it can be seen from above, all of Mrs Kingshaw's feelings, thoughts and experiences are inter-linked and closely related. Altogether, they have contributed greatly to the marriage, Hooper's psychological bullying and Kingshaw's helpless and hopeless plight, the key events in the novel. ...read more.