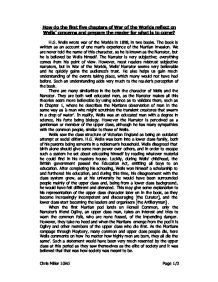 How do the first five chapters of War of the Worlds reflect on Wells' concerns and prepare the reader for what is to come?

How do the first five chapters of War of the Worlds reflect on Wells' concerns and prepare the reader for what is to come? H.G. Wells wrote war of the Worlds in 1898, in two books. The book is written as an account of one man's experience of the Martian invasion. We are never told the name of this character, so he is known as the Narrator, but he is believed be Wells himself. The Narrator is very subjective; everything comes from his point of view. However, most readers mistrust subjective narrators, but in War of the Worlds, Wells' Narrator seems very believable and he quickly gains the audience's trust. He also helps us gain much understanding of the events taking place, which many would not have had before. Such an understanding adds very much to the reader's perception of the book. There are many similarities in the both the character of Wells and the Narrator. They are both well educated men, as the Narrator makes all this theories seem more believable by using science as to validate them, such as in Chapter 1, where he describes the Martians observation of man in the same way as 'a man who might scrutinize the transient creatures that swarm in a drop of water'. ...read more.

This is an important point in the book as this reflects Wells' ideology and proves that the lower classes are no less able than the upper class, and are therefore equal. Once the Narrator and the Artilleryman reach Weybridge they become separated and go on their separate paths. This is not the last we see of the artilleryman as further still into the book, when the Narrator is near London, he yet again stumbles upon his friend. This time the he has an even greater scheme: to hide from the Martians in a network of underground tunnels, and so he enlists the Narrator in helping him to dig the first of these tunnels. Although Wells leaves him to continue with his mission, he talks about him with great respect and admiration. Whilst waling further towards Central London, the Narrator touches on the subject of empire and invasion, likening the colonisation of Earth by the Martians to the manner in which Britain conquered Tasmania and butchered the 10,000 or so Aboriginals who lived there. The invasion of the Martians might also have been used to make Britain see how fragile her empire was, as at this period many countries were overthrowing their monarchies and replacing them with democracies. ...read more.

He is also very quick to state that no matter how hard humans strive to better nature, they can never match its power, which is very much backed up by the defeat of the Martians who were not beaten by human efforts but by 'terrestrial bacteria, to which they had no defence'. He also remarks upon how advanced the Martians were and how if it had not been for the intervention of nature, humanity would have been wiped out. Some how, the reader gets the message that the Narrator is trying to show humans that they are not the most intelligent species, and have no right to control others. Combined with many of the other remarks made at various points through the book, it appears that Wells is trying to put across a very important political message, but in an indirect context. The War of the Worlds was a fascinating read; it had a real affect on my views on class, invasion and the origins of science fiction. Wells has sometimes been called the 'Father of Science Fiction' and many would certainly agree that his ideas were well ahead of their time and still bear some relevance in our modern society. ?? ?? ?? ?? Chris Miller 10AG Page 1/3 ...read more.