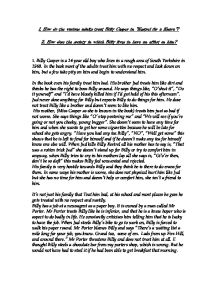 How do the various adults treat Billy Casper in &quot;Kestrel for a Knave&quot;?

1. How do the various adults treat Billy Casper in "Kestrel for a Knave"? 2. How dose the society in which Billy lives in have an effect on him? 1. Billy Casper is a 14 year old boy who lives in a rough area of South Yorkshire in 1968. In the book most of the adults treat him with no respect and look down on him, but a few take pity on him and begin to understand him. In the book even his family treat him bad. His brother Jud treats him like dirt and thinks he has the right to boss Billy around. He says things like, "O'shut it", "Do it yourself" and "I'd have bloody killed him if I'd got hold of his this afternoon". Jud never dose anything for Billy but expects Billy to do things for him. He dose not treat Billy like a brother and doesn't seem to like him. His mother, (Miss Casper as she is known in the book) treats him just as bad if not worse. She says things like "O' stop pestering me" and "We will see if you're going or not you cheeky, young bugger". ...read more.

But he would not have had to steel it if he had been able to get breakfast that morning. When Billy comes back from his paper round, Mr Porter thinks that he had not done it properly. He says "what did you do, throw half of em over a hedge", this emphasizes how he dose not trust Billy and is constantly nasty towards him. Billy seems just to take all this and even plays a joke on Mr Porter, by shaking the ladder he is on. When Billy is at school Billy gets treated just as bad. His school is run down and old. The most the teachers expect from the kids is that they get a poor job in mines or somewhere like that. All of the teachers pick on Billy and don't expect anything good to become of Billy. His head master gives Billy the Kane for daydreaming in assembly. Also while he is waiting to be kaned a boy gets mixed up and is kaned also, when all he was doing was delivering a message. This shows how the teachers don't listen and show no care or concern in anything the pupils do. ...read more.

He is very poor and mainly has to look after him self. People's expectations of Billy are pretty low. He is expected to go to a bad school get a job at 16 that will just get him through life just as most people are expected to do Where he lives it is very run down and nobody looks after the gardens or houses, "Most of the gardens were uncultivated squares of stamp soil, or overgrown with vegetation". But Billy is different, he keeps his shed very tidy and is completely different to the rest of the estate. It is clean, painted and well looked after, "The walls and ceiling were white washed and the floor had been sprinkled with a think layer of dry sand. Even the book he steels is well looked after. He dose not fit into his rough background, the real Billy comes out when he is on the field round the back with the nature and Kes. He decides not to get a dead end job and at the end of the book it suggests that there are only good things to come "It stopped raining. The clouds were breaking up and stars showed in the spaces between them". This shows that it now can't get any worse and he can only get better and have a lifestyle more suited to him. By William Oliver ...read more.