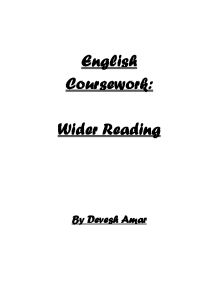 How do the writers of 'The Red Room' and 'The Whole Town's Sleeping' create tension in their stories?

English Coursework: Wider Reading By Devesh Amar How do the writers of 'The Red Room' and 'The Whole Town's Sleeping' create tension in their stories? Many things create fear. Loneliness, isolation, the supernatural, and darkness are just a few of the major causes. All of these are branches of one thing, the unknown; the absence of knowledge or the denial of what may happen. No one has done everything and nor does anyone know everything. But most importantly, no single individual can explain everything because many things are out of their control and just cannot be rationalised. This leads to the imagination of an individual presuming what the unknown object is, leading to an increase in the creation of feelings making him/her more vulnerable. There are some people who worry about their fears and some who ignore them, in the process paying the price for their ignorance. H G Wells and Ray Bradbury have both expressed these messages in the form of their protagonists in their stories ''The Red Room'' and ''The Whole Town's Sleeping'' respectively. ''The Red Room'' was written in 1896 by then young scientist H G Wells. Its genre is horror. It draws on elements of gothic literature, a specific type of horror that is based on darkness and ghosts. It has glances of supernatural elements and has a very old, traditional and ancient setting; all of these elements are of gothic literature. In this text, the protagonist is in the form of a young man aged twenty-eight, who is a typical Victorian of his time. The first sentence of the text that is "'I can assure you,' said I, 'that it will take a very tangible ghost to frighten me.'" itself shows his arrogance and how he wants to rationalise everything. This is ironic, as the outcome of the story shows us that it wasn't even a ghost that scared him, but it was the unknown and indescribable that created fear in him. ...read more.

The old woman also says that she would be in with her gun, this is also typical of he 1950's when women began to move ahead in society and began to establish themselves in the working class. This conversation links with the H G Well's story, as again the wisdom of the aged is advising the rather ignorant, younger generation and also because in both texts, the characters have a trust in technology. In "The Whole Town's Sleeping", the old woman holds a gun to protect her from the Lonely One and in "The Red Room", the young man "held his revolver" showing how he uses the weapon to assure him safety. This symbolises violence, which in turn leads to conflict and tension. A very sensual bit of imagery is used in the beginning, which also acts as a precursor- "The heat pulsed under your dress and along your dress and along your legs with a stealthy sense of invasion." This links to the Lonely One as it's as if he/she is creeping up behind his victim, set to attack. This imagery is very sensual and sexual, and links to a earlier piece of personification when Lavinia feels the "warm breath of the summer night". This again makes us feel as if someone were very close to her, and again gives clues pointing towards the Lonely One. In "The Red Room", there is a slow and definite progression in tension in this text, as the young man experiences a journey from arrogant self-assurance to irrational terror and then finally to awareness. They play around with the reader's emotions, and manipulate the rise and fall of the tension. A good example of this progression in this text is from his beginning attitude- "it will take a very tangible ghost to frighten me", to his imagination leading him to insane measure of personifying the shadows -"the shadows I feared and fought against returned, and crept in upon me", to understanding and awareness in the end- "Their ...read more.

A very effective extract can be spotted when the young man is in the room- "my candle was a little tongue of light in its vastness, that failed to pierce the opposition end of the room, and left an ocean of mystery and suggestion beyond its island of light." The imagery in this extract suggests his increasing feelings of insecurity and vulnerability and his sense of danger. The effective juxtaposition of diction "little" with the "vastness" of the room and the darkness creates a sense of his incompetence. He feels out of his depth, which is a marked contrast to his earlier cynical and ignorant attitude. Darkness has been used as a metaphor for irrational fear throughout this text, and even in this phrase, you can see that the "mystery" is caused by the darkness itself. He is feeling isolated and abandoned in his little lighted area, which is equivalent to an island in between a vast ocean. He feels the same way as a shipwrecked person, who would be petrified and extremely anxious to know what lies around him. Almost the whole room is hidden under a blanket of darkness, and he fears the unknown part of it. "The Red Room" and "The Whole Town's Sleeping" were two stories in which two individuals, both preachers of their time, experienced a journey from ignorance, over-confident and flippant attitudes, to awareness and understanding. They both ask for trouble, but when facing it, they break down into totally different people, who are nervous, panicky, frightened, and eventually their imagination leads them to becoming crazy. The morals of both of these texts are that one should always take advice and not be so narrow-minded, and that nothing actually exists if one doesn't believe it exists. In H G Well's text, the young man personifies fear with the red room. He has had a fight with his fear and in the end his fear wins. For me, the red room symbolizes one's own fear. Nothing is actually in the room except what one believes is there. -1- ...read more.