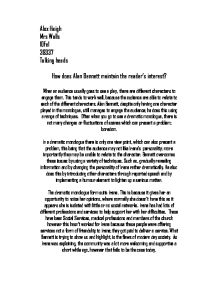 Alex Haigh Mrs Walls 10fe1 39337 Talking heads How does Alan Bennett maintain the reader's interest? When an audience usually goes to see a play, there are different characters to engage them. This tends to work well, because the audience are able to relate to each of the different characters. Alan Bennett, despite only having one character played in the monologue, still manages to engage the audience; he does this using a range of techniques. Often when you go to see a dramatic monologue, there is not many changes or fluctuations of scenes which can present a problem; boredom. In a dramatic monologue there is only one view point, which can also present a problem, this being that the audience may not like Irene's personality; more importantly they may be unable to relate to the character. Bennett overcomes these issues by using a variety of techniques. Such as, gradually revealing information and by changing the personality of Irene rather dramatically. ...read more.

This helps us understand Bennett's ideas as it makes us think about our society today and if prison is really better than living in the outside world as an elderly citizen. If this is the case we have to question where community is going wrong. Bennett gradually reveals information about Irene to keep the reader interested and intrigued in order to read on. At the beginning of the play, Bennett doesn't reveal too much information about Irene, so we don't actually realise how much Irene does depend on writing and the seriousness of her letters. We don't know the full story about the 'kiddie' until the climax of the play. Irene made us think the kiddie was being mistreated by her comments, such as when she refers to the kiddie as 'thin little thing, bruise on its arm' and 'I keep wondering about that kiddie' 'every single night the parents go off'. ...read more.

Consequently he does not reply. When Irene realises he didn't send him another letter back she gets herself all worked up and just remarks' typical' as if it was him that was out of order. This makes the audience think that she doesn't know herself and yet we do. Bennett uses Irene to bring other characters into the play through reported speech, which creates variety to the play. One of the characters that Irene talks about is 'the vicar', Bennett describes the vicar very briefly, yet you still get a vivid image of what you think he would look like. Bennett does this by using short descriptive comments, such as 'a young fellow in a collar and tie'. Bennett also uses this technique to describe other characters, for example the social worker. He uses lots of little descriptions that are effective in imaging images, like 'shocking finger nails', 'ginger hair' and 'a hole in her tights the size of a fifty pence piece'. Irene portrays these characters through her own personal opinions and views however through the audiences view, we could portray these individuals completely differently. ...read more.