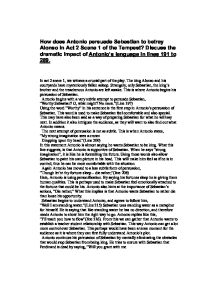 How does Antonio persuade Sebastian to betray Alonso in Act 2 Scene 1 of the Tempest? Discuss the dramatic impact of Antonio&amp;#146;s language in lines 191 to 289.

How does Antonio persuade Sebastian to betray Alonso in Act 2 Scene 1 of the Tempest? Discuss the dramatic impact of Antonio's language in lines 191 to 289. In act 2 scene 1, we witness a crucial part of the play. The king Alonso and his courtyards have mysteriously fallen asleep. Strangely, only Sebastian, the king's brother and the treacherous Antonio are left awake. This is where Antonio begins his persuasion of Sebastian. Antonio begins with a very subtle attempt to persuade Sebastian, "Worthy Sebastian? O, what might? No more."(Line 197) Using the word "Worthy" in his sentence is the first step in Antonio's persuasion of Sebastian. This word is used to make Sebastian feel comfortable and also special. This may have also been said as a way of preparing Sebastian for what he will say next. In addition it also intrigues the audience, as they will want to also find out what Antonio means. The next attempt of persuasion is not as subtle. ...read more.

Antonio continues his persuasion of Sebastian by mentally eliminating the obstacles that would stop Sebastian from being king. He tries to ensure with Sebastian that Ferdinand is dead by saying, "Will you grant with me That Ferdinand is drowned?" by saying this Antonio is trying to eliminate any of Sebastian's hope of Ferdinand being alive. Next, Antonio starts eliminating Claribel as a possible threat to Sebastian's chances. "She that dwells Ten leagues beyond man's life;"(Line 238). What we can understand from this is that Antonio wants Claribel to seem unimportant. He does this by addressing her as "She". This depersonalises her, that way Sebastian will have less feeling towards her. Antonio again tries to distance Sebastian and Claribel, this time by emphasising the physical gap between them. "She that dwells". Antonio is trying to emphasise the fact that Claribel is so far away she would have no control over what happens. In this part Antonio also hyperbole to emphasise his point. "Ten leagues beyond man's life;" Antonio is using a measurement to describe to Sebastian how far Claribel is. ...read more.

Telling Sebastian something like this would encourage Sebastian to desire Alonso's crown more. Further along the scene Antonio attempts to remove Sebastian's respect for Alonso by insulting him. When talking about Alonso, Antonio states, "No better than the earth he lies upon,"(Line 274). This statement is designed to eradicate Sebastian's respect and sympathy for Alonso. Antonio compares Alonso to dirt, and ranks them the same. Antonio probably does this to tell Sebastian that Alonso is unimportant and has no authority over them where they are. This part might have had quite a dramatic affect on the audience. By this point the audience might also feel sympathy for Alonso and the courtyards that are facing death without knowing. Over the course of the scene Alonso's persuasion sinks through to Sebastian and they both agree to kill Alonso and Gonzalo. Antonio uses a wide variety of techniques to persuade Sebastian. Without them it would not have been possible to turn Sebastian against his brother. All of Antonio's words have a dramatic impact on Sebastian and the audience, allowing us to get a better understanding of their characters just through their words and reactions. ...read more.