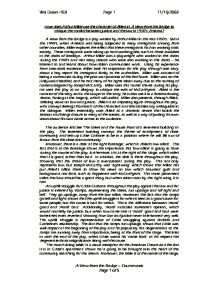 How does Arthur Miller use the character of Alfieri in A View from the Bridge to critique the conflict between justice and the law in 1950(TM)s America?

How does Arthur Miller use the character of Alfieri in A View from the Bridge to critique the conflict between justice and the law in 1950's America? A View from the Bridge is a play written by Arthur Miller in the mid-1950's. Set in the 1940's, when America was being subjected to many immigrants arriving from other countries, Miller explores the effect that these immigrants had on working class society. These immigrants were taking up hard-working jobs, such as those available in the docks of Brooklyn. Arthur Miller was a playwright who worked in the docks during the 1940's and met many Italians who were also working in the docks - he listened to and learnt about how Italian communities work. Using his experience from anecdotal evidence, Miller took his inspiration for this play through one story about a boy report his immigrant family to the authorities. Miller was accused of being a communist during the post-war paranoia of the Red Scare. Miller was on the Hollywood blacklist, and he had many of his rights taken away due to this naming of names instigated by Joseph McCarthy. Miller uses this 'name' theme during his play. He uses this play as an allegory to critique the evils of McCarthyism. Alfieri is the narrator of the story and is the lawyer in the story; he is also used as a foreshadowing device, hinting at the tragedy, which will unfold. Miller also presents, through Alfieri, differing views on law and justice. Alfieri is an imposing figure throughout the play, who conveys feelings from each of the characters and also clarifies any ambiguities in the dialogue. Miller, essentially, uses Alfieri as a dramatic device that builds the tension and brings closure to many of the scenes, as well as a way of putting his own views about his own name across to the audience. ...read more.

Gangsters are also prime examples of having man's fatal flaw, as they do everything in order for their empire to get bigger. This also shows how immigrant communities sometimes do not get the service from American law that Americans do and this links into McCarthyism. A View from the Bridge is a Greek tragedy, and Alfieri mentions how 'the law has not been a friendly idea since the Greeks were beaten' this implies that Italian law is more based on what is justice for the crime. Contradicting American law, which is based on books and rules, which are to be followed by judges and jurors. This is one main clash between law and justice in the play - it is not only a clash between the law and justice in America in the 1950's, but it is also a clash between Italian and American culture. Alfieri says 'Now we settle for half and I like it better' this implies that people are more compromising, so it is not as hard to be a lawyer. In addition, it foreshadows the splitting of the community in 'half'. Moreover it shows how there are two different views on whether justice is being served and this depends on whether law from the country or justice for the individual should be more important. Implying that what is going to happen in the story is common, Alfieri says 'Every few years there is still a case...'. This also links in with the story of 'Vinny' and how he betrayed his family to the immigration authorities. This is foreshadowing what Eddie is going to do later in the play, but also shows that American law encounters problems with Italian justice regularly. ...read more.

But, he is unable to do so, because of how that story is set from the beginning, and also how the story is repetitive, as 'every few years there is still a case'. Alfieri makes a final speech directly after Eddie has died; this speech brings closure to the play and gives us last impressions of the characters. Furthermore, Alfieri says in his final speech 'Most of time now we settle for half and I like it better.' This makes the play cyclical, as he mentions 'settling for half' in his opening speech. This then links with the line 'every few years, there is still a case.' This is a connection because it shows that these incidents go in a cycle too, and therefore it is going to happen again to someone else. Moreover, Alfieri uses a few Biblical words in his final speech such as 'confess', 'holy' and 'purely', this shows that Alfieri believes only God can give justice to issues, and not either community. In Addition, Alfieri says at the end 'And so I mourn him - I admit - with a certain...alarm.' This infers that Alfieri does not blame Eddie for what he did, and even believes it was the right thing, but is not sure whether he should believe that or not. In conclusion, Miller seems to convey the message that the law stays in each separate country, but justice stays with the person. However, the law is justice in some countries, but in most law and justice are completely different, and therefore sometimes the people have to go the wrong side of the law, in order to get on the right side of justice. ?? ?? ?? ?? Will Dixon -10B Page 1 11/10/2008 A View from the Bridge - Coursework Page 1 of 6 ...read more.