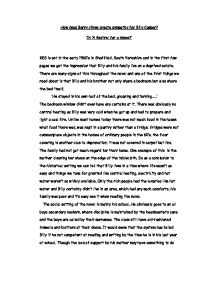 How does Barry Hines create sympathy for Billy Casper? In a kestral for a knave

How does Barry Hines create sympathy for Billy Casper? In 'A Kestrel for a knave?' KES is set in the early 1960's in Sheffield, South Yorkshire and in the first few pages we get the impression that Billy and his family live on a deprived estate. There are many signs of this throughout the novel and one of the first things we read about is that Billy and his brother not only share a bedroom but also share the bed itself. 'He stayed in his own half of the bed, groaning and turning......' The bedroom window didn't even have any curtains at it. There was obviously no central heating as Billy was very cold when he got up and had to prepare and light a coal fire. Unlike most homes today there was not much food in the house what food there was, was kept in a pantry rather than a fridge; fridges were not commonplace objects in the homes of ordinary people in the 60's. the floor covering is another clue to depravation; it was not covered in carpet but lino. The family had not got much regard for their home. One example of this is the mother cleaning her shoes on the edge of the tablecloth. So as a conclusion to the historical setting we can tell that Billy lives in a time where life wasn't as easy and things we take for granted like central heating, electricity and hot water weren't so widely available. Only the rich people had the luxuries like hot water and Billy certainly didn't live in an area, which had any such comforts, his family was poor and it's easy see it when reading the novel. ...read more.

The camera shows the view of the bed so we can see both characters as they have their conversation of pronounced limited dialogue. Then there is a sudden shock of light shown with a mid-shot as Jud gets up and presses the light switch. This dramatic change between dark and light and a point of view shot seems to leave Billy looking vulnerable tucked up beneath the tattered covers. As Billy gets up to get dressed into his dirty clothes we hear a soft sound of a recorder in the background, and the only light is that coming from the window. The film misses out the scene when Billy is looking for food in the kitchen and lighting the fire, and proceeds to the scene outside. In this scene we see Billy running down the street from a mid-shot and then a wide-shot as he runs across the field. The next scene we see is in the shop where we see and hear the conversation between Billy and the shopkeeper. It's still quite dark in the shop with only natural light, which shows us that it was not filmed in a studio. The camera zooms in on Billy's grubby face, which shows us he hasn't had a wash and we can also see the disgusting state of his clothes. This kind of graphic detail cannot be seen when reading the novel but when watching the film we can see extra details within the scenes. When listening to the criticism Billy gets off the shopkeeper we feel saddened because we get the impression he is judged by his standard of living and not by his personality. ...read more.

Later on in the match we see Billy hanging off the goals, completely disinterested in the game. When Sugden sees him he blows his whistle and the camera follows him as he marches and shouts up the pitch towards Billy. Throughout the scene the camera frequently concentrates on the number nine on Sugden's shirt, this technique is used to show how important he thinks he is and how insignificant Billy and the rest of the class are. This scene finishes with the barbaric Mr Sugden forcing Billy to take a shower and Billy's feeble attempts to avoid one. We see Sugden trap him in the shower and turn the water to cold. We see Billy suffering and hear the sadistic voice of Sugden as he admonishes him for letting in the goal. However there is a note of triumph at the end of the scene when we watch Billy clamber over the cubicle wall and the camera fades out as he finds a towel. This is a satisfying end as the viewer feels that he has gained just a little recognition. This differs from the novel where he has to drip-dry. In conclusion I feel that the film creates more sympathy within me than the novel does. This is because the visual images of the scene are more detailed. Characters expressions are more vivid, lighting and music add to the mood of the scene and various camera shots depict more keenly the important parts of the scenes. Whereas in the novel the description and dialogue help the reader build up a sense of sympathy towards Billy, the images, for me, are not as powerful nor as clear. ...read more.