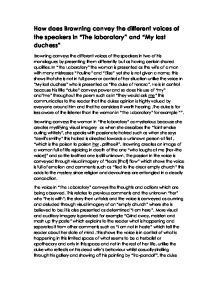 How does Browning convey the different voices of the speakers in "The laboratory" and "My last duchess" Browning conveys the different voices of the speakers in two of his monologues by presenting them differently but as having certain shared qualities. In "The Laboratory" the woman is presented as the wife of a man with many mistresses "Pauline" and "Elise" yet she is not given a name; this shows that she is not in full power or control of her situation unlike the voice in "My last duchess" who is presented as "the duke of Ferrara". He is in control because his title "duke" conveys power and so does his use of "my" and"me" throughout the poem such as in "they would ask me" this communicates to the reader that the dukes opinion is highly valued by everyone around him and that he considers it worth hearing .The duke is far less aware of the listener than the woman in "The Laboratory" for example "". Browning conveys the woman in "the laboratory" as mysterious because she creates mystifying visual imagery as when she describes the "faint smoke curling whitely", she speaks with passionate hatred such as when she ...read more.

not in haste" which tell the reader about her state of mind .This shows the voice is in control of what is happening in this limited space of what seems to be a herbalist or apothecary and only in this space and not in the rest of her life, unlike the duke who reflects on his dead wife's behaviour whilst casually strolling through his gallery and showing off his painting by "fra-pandolf", the duke makes it unclear whether she was his first duchess or not and the gallery could be filled with tens of paintings of his previous duchesses. Browning conveys the duke as in control throughout the poem "will't you please sit and look at her?" and therefore does not need to go to extreme lengths to conserve his power; unlike the woman who concentrates on how the mistresses will die and says "her arms and her hands, should drop dead" and she will suffer and it will "hurt her" this control gives her a sense of power as there lives are in her hands . For the voice in "The Laboratory" death is "a mere lozenge to give" and so again the voice relishes her almost god like power . ...read more.

The visual imagery created by the Browning in "my last Duchess" shows the duke wants a proud wife, somebody complex with an air of grace and mock modest like him. The imagery of an innocent and humble duchess riding a "white mule" "[a]round the terrace" and gratefully receiving gifts of "cherries" from an "officious fool" displeased the duke as perhaps he thought she was just as grateful to the "fool" as she was to him, while his gift of a "nine-hundred-year-old name" was life changing, unlike the bunch of cherries. The duke tries to create imagery of a pathetic duchess who is childlike. Browning gives the duke of Ferrara a complex personality through the use mock modesty for example he says "had you skill in speech - (which I have not)", this suggests he uses modesty to make the listener (who is in the gallery with him) comfortable. The dukes boastfulness is conveyed through his speech especially when he says "her mantel laps over my ladies wrist too much" this shows that the duchess was dressed in expensive finery , this could also be seen by the reader as proof that he treated her well and that she abused his kindness by deliberately acting inappropriately for her role. ?? ?? ?? ?? ...read more.

When looking at two poems in the same essay you must try to link them throughout the essay; look at the use of structure, language and form and how they are used in similar and different ways to create certain effects.