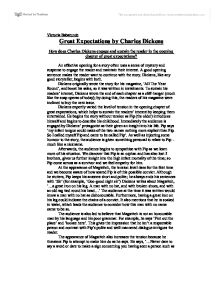 How does Charles Dickens engage and sustain the reader in the opening chapter of Great Expectations?

Victoria Babatunde Great Expectations by Charles Dickens How does Charles Dickens engage and sustain the reader in the opening chapter of great expectations? An effective opening for a story often uses a sense of mystery and suspense to engage the reader and maintain their interest. A good opening sentence makes the reader want to continue with the story. Dickens, like any good storyteller, begins with both. Dickens originally wrote the story for his magazine, 'All The Year Round', and boost his sales, so it was written in instalments. To sustain his readers' interest, Dickens wrote the end of each chapter as a cliff-hanger (much like the soap operas of today); by doing this, the readers of his magazine were inclined to buy the next issue. Dickens expertly varied the level of tension in the opening chapter of great expectations, which helps to sustain the readers' interest by keeping them entertained. He begins the story without tension as Pip (the older) introduces himself and begins to describe his childhood. ...read more.

The audience at the time it was written would know a man with no hat as dishonourable. Furthermore, having a great iron on his leg could indicate the chains of a convict. It also mentions that he is soaked in water, which leads the audience to consider how this man with no name came to be so. The audience is also led to believe that Magwitch is not an honourable man by his language and his poor grammar. For example, he says 'Pint out the place' and 'lookee here'. This gives the impression that he isn't a respectable person and contrast with Pip's polite and well mannered dialogue intrigues the reader. The appearance of Magwitch also increases the tension because he threatens Pip to attempt to make him do as he says. He says, '...Never dare to say a word or dare to make a sign concerning you having seen a person such as me'. This reinforces the idea that Magwitch may be an escaped convict, making him seem even more menacing to the audience. ...read more.

However, at this point Pip has the upper hand as he knows that Magwitch could be a criminal. He could easily go to the authorities and not bring him the things he wants. I believe that he sympathises with Magwitch's situation and senses that an adventure might be afoot for him if he comes back to Magwitch. When he sees Magwitch walking towards the gibbet and shivering, he appears vulnerable. The audience becomes aware that this man has nowhere to go, no warm clothes and no food. It becomes apparent that maybe he is not as evil as he first seems. Dickens cleverly draws his audience into the story by using a semantic field around death and bleakness and a sympathetic landscape. The scenery reflects how the main character, Pip, is feeling. By describing the setting as 'overgrown' the reader gets imagery of a desolate area. Somewhere un-kept with uncut grass and never visited (save perhaps, for Pip). By using two characters that are so different, Dickens creates a scene that appeals to all audiences. The sharp contrast grips the readers attention; and with his great storytelling, Dickens engages and sustains the readers attention throughout the opening chapter. ...read more.