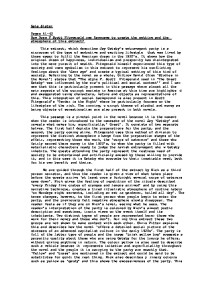 How Does F Scott Fitzgerald use Language to create the setting and the atmosphere of this extract?

Gala Slater Pages 41-42 How Does F Scott Fitzgerald use Language to create the setting and the atmosphere of this extract? This extract, which describes Jay Gatsby's extravagant party is a microcosm of the type of seductive and exciting lifestyle that was lived by those eager to fulfil the American dream in the 1920's. It shows how the original dream of happiness, individualism and prosperity has disintegrated into the mere pursuit of wealth. Fitzgerald himself experienced this type of society and uses symbolism in this extract to represent his conflicting feelings about the 'Jazz age' and create a typical setting of this kind of society. Referring to the novel as a whole, Giltrow David (from 'Studies in the Novel') states that "The style F. Scott Fitzgerald used in 'The Great Gatsby' was influenced by the era's political and social context'' and I can see that this is particularly present in this passage where almost all the main aspects of the corrupt society in America at this time are highlighted and exaggerated using characters, nature and objects as representations of this. This integration of social background is also present in Scott Fitzgerald's 'Tender is the Night' where he particularly focuses on the lifestyles of the rich. ...read more.

Two distinct types of people are represented here: those who work for their money and those who don't. During this extract these two groups are not shown to make contact with each other. Chris Fitter explains this and describes how the novel 'offers a detailed social picture of the stresses of an advanced capitalist culture in the early 1920s'. The party is full of the latter type of people and the image 'brisk yellow bug' suggests a parasitic quality about those who are using Gatsby for the luxury he offers, without giving anything in return. The colour yellow is also used to describe such a vehicle because it represents imitation and superficiality throughout the novel and the people it is carrying to the party are exactly that. 'Yellow' and 'brass' are mentioned in the extract and could be said to be substitutes for gold: the real thing. Nick also describes primary colours such as yellow as 'gaudy' and this shows the excessiveness of the party. This is reflective of the fact that Gatsby's party is not in fact the "real thing" either and is merely a show to display the wealth he has unfairly gained. ...read more.

Fitzgerald also incorporates the senses in his description to allow the reader to closely relate to what was being experienced at the party. Sounds are frequently mentioned in both a musical sense 'the orchestra' and in a conversational sense 'the air is alive with laughter and chatter'. A rich variety of colours are also used 'coloured lights' 'primary colours' and this creates an exuberant and almost theatrical atmosphere. The whole of the passage is very much like a performance in the way it is divided into preparations and show time, however there is a mysterious air to it all because of the absence and lack of reference to the main actor, who in this case is 'Gatsby' himself. The prolonged arrival of such a main player creates tension and mystery in this passage. Fitzgerald's rich use of metaphorical and symbolic language in the passage strangely contrasts with the underlying tone of death deceit and tragedy, particularly throughout this extract, and successfully creates a superficial setting which lacks control and reality, whilst at the same time allows the reader to experience the atmosphere that would have been felt as a guest. This idea is clearly expressed by Cyril Connolly who summarised that Fitzgerald's 'style sings of hope. His message is despair'. ...read more.