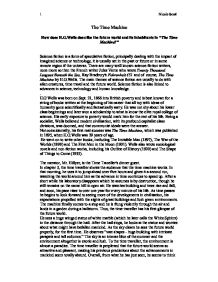 How does H.G.Wells describe the future world and its inhabitants in &quot;The Time Machine?&quot;

The Time Machine How does H.G.Wells describe the future world and its inhabitants in "The Time Machine?" Science fiction is a form of speculative fiction, principally dealing with the impact of imagined science or technology, it is usually set in the past or future or in some remote region if the universe. There are many well known science fiction writers, none more so then the French writer Jules Verne who wrote Twenty Thousand Leagues Beneath the Sea, Ray Bradbury's Fahrenheit 451 and of course, The Time Machine by H.G.Wells. The main themes of science fiction are usually to do with alien creatures, time travel and the future world. Science fiction is also linked to advances in science, technology and human knowledge. . H.G Wells was born on Sept. 21, 1866 into British poverty and is best known for a string of books written at the beginning of his career that all toy with ideas of humanity gone scientifically and fantastically awry. He was not shy about his lower class beginnings and later won a scholarship to what is know the elite royal college of science. His early exposure to poverty would mark him for the rest of his life. Being a socialist, Wells believed modern civilisation, with its profound capitalist class divisions, was doomed, and that communist ideals were the answer. Not coincidentally, his first real success was The Time Machine, which was published in 1895, when H.G.Wells was 29 years of age. He went on to write other books, including The Invisible Man (1897), The War of the Worlds (1898) ...read more.

On his third day, the time traveller saves a young female Eloi from drowning in a river. Like all the other Eloi, she is afraid of the dark and is adamant that the time traveller sleeps with them. The time traveller sees no evidence of anything remotely alarming during the nights he's spent on the future world. However, he wakes at dawn one morning and witnesses what he can only describe as white ape like creatures running alone up a hill. He is slightly alarmed and thinks they might even be ghosts, he concludes that they would soon "take a far deadlier possession of my mind." The next day the time traveller finds a dark narrow gallery and entering it he comes across a pair of eyes watching him in the darkness. He speaks and touches something soft and a white ape like creature runs behind him and he sees it climb down the wall. It is at this point that the time traveller realises that man has evolved into two diverse creatures: the Eloi who live in the "upper world" and the nocturnal Morlocks who live below. He also receives ample clues to make some more grounded theories. He concludes that the future world is not in fact a communist state as he previously believed, but an excessively capitalist one that is completely divided. Furthermore, he sees the differences between the rich and poor in his modern-day England, have led to the physical evolution of the two species. While the Eloi live lives of luxury, the Morlocks are projections of England's oppressed workers, toiling underground to provide for their masters. ...read more.

I also think the way he described the features of the Morlocks and Eloi are particularly clever. The Eloi's luxurious, carefree lifestyle has made the Eloi weak, frail and lazy. Without the urgent need to survive, the Eloi have not needed to become more "fit" but have instead regressed and become dependent. Similarly, the fact that the Morlocks are effectively slaves of the Eloi has made them strong and bigger than the Eloi, and have even adapted to their environment by being able to see in the dark. I also think the way in which the time traveller finds out more as the story progresses and makes theories based upon the evidence he has seen so far is particularly helpful to the reader and, I believe, makes them want to find out the final conclusion of the time traveller. I consider the fact that Wells included the character of Weena in the story is very important because in my opinion, if he did not include her the TT's violence against the Morlocks would seem less justified; as it is, he attacks them to avenge her death. I also admire H.G Wells' use of irony in that the time traveller relies greatly on ancient survivalist intelligence to overpower the Morlocks. Overall I think this novel was excellent in illustrating, in Wells' view, what could potentially happen if society was to remain as it is. I think Wells had a great imagination, as reflected in the book and used his experiences in life to come up with some very interesting imagery throughout the novel. 1 Nicole Scott ...read more.