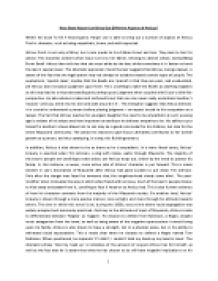 How does Harper Lee bring out different aspects of Atticus?

ï»¿How Does Harper Lee Bring Out Different Aspects of Atticus? Within her book To Kill A Mockingbird, Harper Lee is able to bring out a number of aspects of Atticus Finch’s character, such as being empathetic, brave, and well-respected. Atticus Finch is not only a father, but a role model to his children Scout and Jem. They look to him for advice. This becomes evident when Scout turns to her father, refusing to attend school, exemplifying Burris Ewell. Atticus then tells her that she must abide by the law, whilst sometimes it is ‘better to bend the law in special cases’. The idiomatic expression ‘bend the law’ suggests that Atticus, being a lawyer, is aware of the fact that the legal system may not always be suitable towards certain types of people. The euphemism, ‘special cases’, implies that the Ewells are ‘special’ in that they are poor, and uneducated, yet Atticus does not place judgment upon them. He is unwilling to label the Ewells as anything negative as this may lead to a misunderstanding and perhaps poor judgment when coupled with Scout’s child-like perspective. He also advises a naïve and confused Scout that one can never really understand another’s reasons ‘until you climb into his skin and walk around in it’. ...read more.

The personal pronoun ?I? implies that this case has a more personal attachment to him, in that if he had refused the case, he would regret, causing him to question the strength of his morals and ability to stand by them. Atticus is also a man with a strong moral compass. One of the more superficial ways in which Lee displays this, is within his name. ?Finch? being the proper noun of both a species of bird as well as Atticus? family name, is symbolic of doing the right thing, as practiced by Atticus in both his daily life and occupation. For example, upon discovering Jem?s persistent plans to make Boo Radley come out, he scolds them for having putBoo Radley?s life ?on display for the edification of the neighbourhood?. The noun ?edification? implies that the children, in Atticus? perspective, see Boo Radley with lack of humanity, only there to act as a frequent rumor topic for the town, ultimately acting as a source of entertainment inMaycomb. Unlike most of the town, he stands up for Boo Radley, empathizing and protecting him for further neighbourhood ridicule and hearsay. This is also reflected in his defending Tom Robinson thereby keeping to his morals but defying the social norm. ...read more.

The intensifier coupled with the adverb ?nearly? takes on a more positive tone ? a euphemism for ?Jem is wrong?. Atticus has enough respect for his son, careful as to not put him down directly, discouraging him, but gently enough to let Scout know that her older brother may not always be correct. In addition, when his children ask him if the tree Mr Nathan Radley had filled with cement was, in fact dying, as previously stated by MrRadley, Atticus chooses to avoid giving a direct answer, stating that ?MrRadley knows more about trees? than he does. Despite the fact that the tree was obviously not dying and looked healthy, Atticus did not expose this, confident in the fact that MrRadley had his reasons for lying. This is suggests that he respects Nathan Radley?s choices enough not question them. Harper Lee is able to present Atticus as a man of many attributes. His ability to empathize shown within his relationship with his children, his bravery within the encounter with Tim Johnson, and his strong sense of right and wrong within his willingness to defend a Negro. He inspires admiration and respect from readers. Common with many of the adult characters in To Kill a Mockingbird, the children are microcosms of their fathers, and therefore, much of Atticus is brought out by the Finch children, Jem and Scout. ...read more.