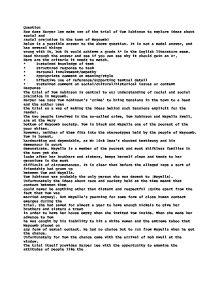 How does Harper Lee make use of the trial of Tom Robinson to explore ideas about social and racial prejudice in the town of Maycomb?

Question How does Harper Lee make use of the trial of Tom Robinson to explore ideas about social and racial prejudice in the town of Maycomb? Below is a possible answer to the above question. It is not a model answer, and has several things wrong with it, but it would achieve a grade A* in the English literature exam. Read through the answer and see if you can see why it should gain an A*. Here are the criteria it needs to match. * Sustained knowledge of text * Structured response to task * Personal involvement/empathy * Appropriate comment on meaning/style * Effective use of reference/supporting textual detail * Sustained comment on social/cultural/historical issues or context Response The trial of Tom Robinson is central to our understanding of racial and social prejudice in Maycomb. Harper Lee uses Tom Robinson's 'crime' to bring tensions in the town to a head and the author uses the trial as a way of making the ideas behind such tensions explicit for the reader. The two people involved in the so-called crime, Tom Robinson and Mayella Ewell, are at the very bottom of Maycomb society. Tom is black and Mayella one of the poorest of the poor whites. However, neither of them fits into the stereotypes held by the people of Maycomb. Tom is honest, hardworking and dependable, as Mr Link Deas's shouted testimony and his demeanour in court demonstrate. ...read more.

Whatever respect or sympathy the reader might have had for Bob Ewell is dispelled by his behaviour in the courtroom and the evidence that Atticus produces that he was the cause of Mayella's beating. Not only is he a self-righteous bully but he is prepared to sacrifice Tom Robinson's life for his own selfish ends. The reader is more likely to feel sympathy for Mayella as the trial progresses. Her loneliness and need for simple human contact are made painfully evident as Scout comes to understand that she is 'the loneliest person in the world', rejected by white people because of her poverty and unable to mix with Negroes because she is white. The causes of her behaviour are made clear and Maycomb's social and racial prejudice have a large part of the blame. In his summing up, Atticus explains her accusation of rape in terms of guilt. She has committed no crime, she has merely broken a rigid and time-honoured code of our society, a code so severe that whoever breaks it is hounded from our midst as unfit to live with. Atticus says explicitly that she is 'the victim of cruel poverty and ignorance' but he cannot condone her actions because her solution involves 'putting away the evidence' and that evidence is the life of a human being. Tom Robinson's innocence is established to Jem's satisfaction at least, but the success of Atticus's case is measured only in the unusual amount of time the jury spend before bringing in a guilty verdict. ...read more.

She and Jem measure the proceedings against simple child-like ideas of truth and justice and find them grossly wanting. On the other hand Jem is an expert on court behaviour from watching her father on other occasions so she is able to give an insightful account into most aspects of the trial. The Tom Robinson case shows the ugliness of both racial and social prejudice. Ultimately the jurors choose to vote along racial lines without regard for truth or justice. Mayella and Tom are both victims of Maycomb's prejudice but only Tom has to pay. Sustained knowledge of text The essay shows an excellent knowledge of the text and refers in detail to specific events. Structured response to task The essay makes a strong opening statement and then deals with the points raised in a clear and logical order. Personal involvement/empathy The candidate has expressed personal opinions about the characters and has justified them with reference to the text Appropriate comment on meaning/style The candidate has discussed the way in which Lee mediates the reader's understanding of events through the character of Scout and how this affects the reader's response. Effective use of reference/supporting textual detail The essay shows a good knowledge of the text and refers to some incidents in detail. There is a good mixture of detailed reference, embedded quotations and longer quotations. Sustained comment on social/cultural/historical issues or context The essay demonstrates an excellent understanding of the social and historical context of the novel. ...read more.