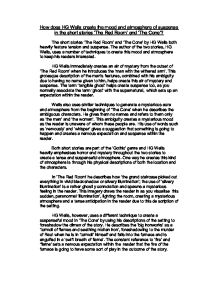 How does HG Wells create the mood and atmosphere of suspense in the short stories 'The Red Room' and 'The Cone'? The short stories 'The Red Room' and 'The Cone' by HG Wells both heavily feature tension and suspense. The author of the two stories, HG Wells, uses a number of techniques to create this mood and atmosphere to keep his readers interested. HG Wells immediately creates an air of mystery from the outset of 'The Red Room' when he introduces the 'man with the withered arm'. This grotesque description of the man's features, combined with his ambiguity due to having no name given to him, helps create this air of mystery and suspense. The term 'tangible ghost' helps create suspense too, as you normally associate the term 'ghost' with the supernatural, which sets up an expectation within the reader. Wells also uses similar techniques to generate a mysterious aura and atmosphere from the beginning of 'The Cone' when he describes the ambiguous characters. He gives them no names and refers to them only as 'the man' and 'the woman'. This ambiguity creates a mysterious mood as the reader is unaware of whom these people are. ...read more.

This example of Wells' use of dialogue adds to the air of mystery of 'The Red Room', as the way in which the narrator conveys his point is very mysterious to a Twenty-First Century reader, this is because the language is so different to our modern day dialect. The Victorian way of speaking did have a mysterious feel to it due to the word order; this is reflected in the mysterious aura created by it throughout the story. 'The Cone' also features Wells' technique of using dialogue to create a suspenseful mood and atmosphere. When Horrocks describes the boiling water below, 'Blood-red vapour as red and hot as sin; but yonder there...it is as white as death.' It is as if Horrocks is telling Raut that he knows all about Raut's sordid affair with his wife and is suggesting to Raut what we now know is going to occur in the dramatic d�nouement of the story. As a reader you suspect that Horrocks is going to seek revenge by making an attempt on Raut's life and this in turn creates tension and suspense. The structure of the stories themselves also helps to create a mood and atmosphere of suspense as we always feel that both stories are building to something. ...read more.

As the characters plight worsens the reader becomes tenser and suspense is created. HG Wells uses a similar technique in the dramatic d�nouement of 'The Cone'. He uses a foray of long sentences to describe the turmoil of Raut when he is clinging to The Cone's chain and ultimately, his life. 'He clutched to the chain...A circle of glowing red appeared about him, and a tongue of flame, released from the chaos within, flickered up towards him.' Again, as Raut's plight grows worse, the audience becomes tenser as the suspense as to whether or not Raut will survive, increases. Aswell as this, Wells technique of using figurative language helps to create a mood and atmosphere of suspense in both stories. In 'The Red Room' Wells uses the metaphor 'My Candle was a little tongue of light' to add to the ghostly atmosphere, however, it also provides the association of fire and light with hope which is a contrast to 'The Cone' where fire is used to represent a form of punishment, which helps to add suspense, 'Blood-red vapour as red and hot as sin'. There are a number of similarities and differences between the two short stories. 'The Red Room' is clearly a ghost story whereas 'The Cone' is a tale of anticipation and suspense. ...read more.