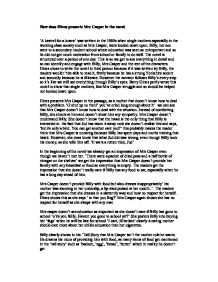 How does Hines presents Mrs Casper in the novel.

How does Hines presents Mrs Casper in the novel. 'A kestrel for a knave' was written in the 1960s when single mothers especially in the working class society such as Mrs Casper, were looked down upon. Billy, her son went to a secondary modern school where education was seen as unimportant and so he did not get much motivation from school or family to do well. The novel is structured over a period of one day. This is so we get to see everything in detail and so can identify and engage with Billy, Mrs Casper and the rest of the characters. ...read more.

Mrs Casper doesn't understand Billy. She doesn't know that the hawk is the only thing that Billy is interested in. the fact that Jud has taken it away now she doesn't realise this and says, 'but its only a bird. You can get another cant you?' this probably makes the reader think that Mrs Casper is uncaring because Billy has spent days and moths training that hawk. However, she does know that what Jud did was wrong, even though Billy took his money, as she tells him off. 'It wa'a a rotten trick, Jud' In the beginning of the novel we already get an impression of Mrs Casper even though we haven't met her. ...read more.

She pesters Billy into buying her 'fags' when he will be late for school 'I cant, ill be late' clearly a caring mother should care more about her childs education than her cigarettes. Billy clearly shows in his 'Tall Story that Mrs Casper isn't the mother role he wants. He dreams his mum of providing him with food, as many items of food get mentioned in the 'tall story' such as 'backen, 'egg', 'bread', 'butter' which in reality he doesn't get. In conclusion, Hines presents Mrs Casper as an uncaring mother, to show that single mothers were looked down upon in society. ...read more.