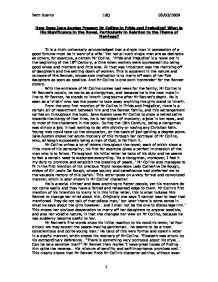 How Does Jane Austen Present Mr Collins in Pride and Prejudice? What is His Significance in the Novel, Particularly in Relation to the Theme of Marriage?

How Does Jane Austen Present Mr Collins in Pride and Prejudice? What is His Significance in the Novel, Particularly in Relation to the Theme of Marriage? 'It is a truth universally acknowledged that a single man in possession of a good fortune must be in want of a wife.' Yet not all such single men are as desirable as others, for example, a certain Mr Collins. 'Pride and Prejudice' is a novel set in the beginning of the 19th Century, a time when women were oppressed into being good wives and mothers and little else. All that was important was the marrying off of daughters and the settling down of women. This is apparent in the nature and purpose of Mrs Bennet, whose sole motivation is to marry off each of her five daughters as soon as possible. And Mr Collins is one such 'contender' for the Bennet sisters. With the entrance of Mr Collins comes bad news for the family, Mr Collins is Mr Bennet's cousin, he works as a clergyman, and because he is the next male in line to Mr Bennet, he stands to inherit Longbourne after Mr Bennet's death. He is seen as a 'villain' who has the power to take away anything the girls stand to inherit. From the very first mention of Mr Collins in 'Pride and Prejudice', there is a certain air of resentment between him and the Bennet family, and this estrangement carries on throughout the book. Jane Austen uses Mr Collins to show a veiled satire towards the clergy of that time, he is her object of mockery; a joke in her eyes, and to most of the characters in the book. During the 19th Century, being a clergyman was simply a job; it had nothing to do with divinity or having any Christian faith. Young men could take up the occupation, on the basis of just gaining a degree alone. ...read more.

When the girls and Mr Collins go to Mrs Philip's house, Mr Collins starts his excessive complimenting once more. He compares her apartment to one at 'dear Rosings' Mrs Philips seems to enjoy talking to him, and takes great interest in his boasts of his 'humble abode.' Yet again when Mr Wickham enters Mr Collins is overshadowed, 'To the girls, who could not listen to their cousin... the interval of waiting appeared very long.' And 'That the commonest, dullest, most threadbare topic might be rendered interesting by the skill of the speaker.' These two comments made by the girls show the blunt differences between Collins and Wickham. It is in this scene that Mr Collins becomes very insignificant, 'With such rivals for the notice of the fair, Mr Wickham and the officers, Mr Collins seemed likely to sink into insignificance, to the young ladies he certainly was nothing.' Mr Collins came to Longbourne to marry, and this is what he intends upon doing. When Mr Collins turns his affections towards Elizabeth, they are not slighted by Mrs Bennet- who encourages them, since she herself has no aspirations of love for her daughter, but rather the respect a 'sensible' marriage could offer. When Mr Collins does propose to Lizzie, it is almost like a speech that he has learnt and prepared beforehand. 'Mr Collins made his declaration in form. Having resolved to do it without loss of time...' His speech is extremely exaggerated and ornate; he speaks of powerful love and passion, which is a complete oddity to his character. 'The idea of Mr Collins with all his solemn composure, being run away with his feelings, made Elizabeth very near to laughing.' After his initial 'poetical rush', he launches into his reasons for wanting to marry. 'My reasons for marrying are... it is the particular advice and recommendation of the very noble lady whom I have the honour of calling patroness.' ...read more.

He is also a representation of the epitome of the clergy during Jane Austen's life. Mr Collins is also used as the opposite of some other characters, including Mr Darcy, Mr Wickham and Mr Bennet. He is compared to them, and this makes a sharp contrast making it easier to picture their characters. Austen uses Mr Collins change in personality to mirror that of Darcy's and Mr Wickham's. Elizabeth judges all these men wrongly, and as Mr Darcy goes up in her view, Wickham and Collins deteriorate. New sides that were once hidden can now be seen, and in Mr Wickham and Mr Collins these sides are much darker, and Collins becomes a much less laughable character. This also shows that despite Elizabeth's superiority of nature to those around her, such as Mrs Bennet who revels in gossip and is quick to judge, Lizzie also makes mistakes, when her pride makes her blind where Mr Darcy is concerned. Mr Collins is portrayed in certain parts of 'Pride and Prejudice' as a mere comic, but he is also pompous and self-satisfied, he shows excessive deference to any one who is higher in social status to him. Despite his occupation as a clergyman Mr Collins shows little Christian humility or humour. His main motive in life is to constantly discuss money, possession, income and to better his social rank. Austen shows a blunted satire towards Mr Collins, and in certain moments he is portrayed as almost pitiful, his social status despite being superior to some is not to be envied. Mr Collins is constantly oppressed by those superior to him, such as Lady Catherine, and his lack of hindsight makes him a foolish man, who shows many sides throughout Pride and Prejudice, some of which are qualities to be envied. However it is towards the end of Pride and Prejudice that Mr Collins stops being a comic character and shows a hidden darker side that is most unlikely in a 'man of the church.' ?? ?? ?? ?? Beth Sparks 10Q 05/03/2009 1 ...read more.